Space roguelike EVERSPACE released on PlayStation 4 recently, and may just merit your attention.

The roguelike genre is an interesting one to crack. While it shares many characteristics with other more mainstream genres, it boasts a certain kind of charm that appeals to a relatively specific subset of gamers. While many often take the form of dingy dungeon crawlers or top-down shootfests, EVERSPACE takes a different bent, and though it may not be for everyone, it might be the one for you if you’re the player that hasn’t yet dipped your toe into the ultra-difficult roguelike waters.

See, I grew up on the spacefighter greats like Star Wars: TIE Fighter and X-Wing, Wing Commander, and—my personal favorite—Descent: Freespace. More recently, I’ve played my fair share of Elite: Dangerous, and loved quite a few aspects of that. If you recognize any of those names and felt your blood start flowing at their mention, I apologize, but this game is not those, not in the least. That’s not necessarily a bad thing, however. 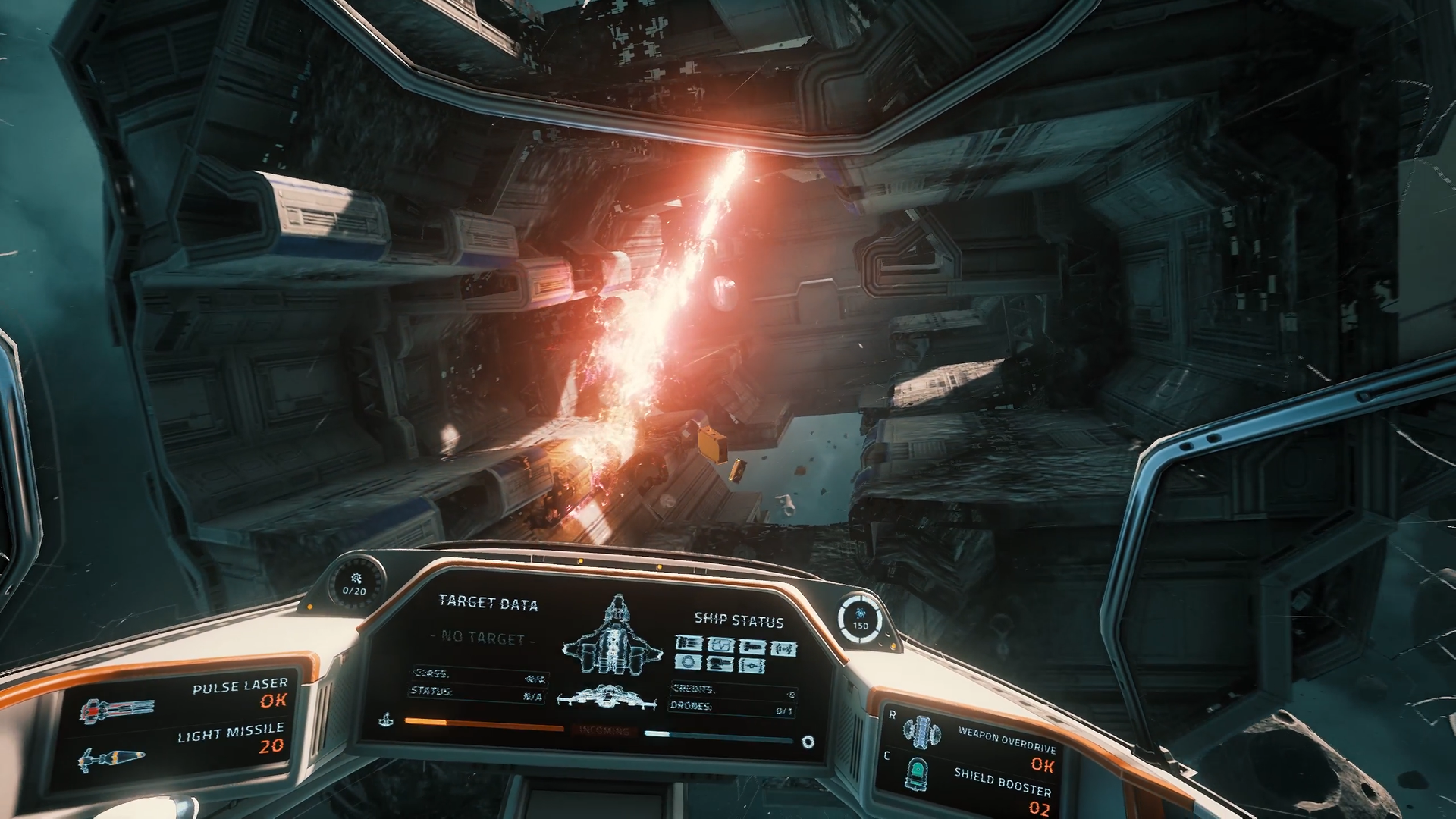 In EVERSPACE, you’ll pilot one of three different ship classes through enemy-infested space, grabbing fresh equipment and trying your best not to die. As you progress, you’ll also collect resources (for crafting upgrades or repairing your ship) and credits (spent between runs to gain permanent bonuses). When you’re done with an area (or if you might die), just point your ship at the jump coordinates, and you’ll jump to the next area. There is a story surrounding your purpose in all this, but it’s honestly just forgettable set dressing.

See, the main draw of the roguelike is that your deaths are “permanent.” Far removed from the checkpoints and autosaves of the modern shooter, roguelikes—EVERSPACE included—demand excellence and focus in every moment of gameplay, or you’ll be starting from the beginning again. This may sound like an exercise in futility, but by that logic, so was every game made in the ’80s and early ’90s. What makes it more interesting is that the game is different every time you play it.

This dynamic generation is where the game really shines, I think. When you couple some solid sci-fi meat with Unreal Engine 4, the visuals really make jumping into a new area feel good pretty much every time. You might come out of the jump in an ice field, with little more than a lonely star nearby to light the way. It might be a wreckage-filled space graveyard, filled with scrap and outlaw pilots. Maybe an ionic storm in space, that periodically causes damage to your ship, but is filled with valuable resources. Or, my favorite so far, a jump gate near a singularity, which is constantly pulling rare resources toward it, making collecting them a particularly risky endeavor as you risk spaghettification.

To make it through all this, you have to outfit your ship. There are three to pick from, each with their own quirks and limitations: the interceptor, the scout, or the gunship. Interceptors are built for balance: it has the widest variety of usable equipment, and a healthy hull and engine makeup. The scout is agile, but fragile, employing cloaking devices and teleporters to make up for its less beefy hull. The gunship is a space tank, capable of employing turrets to fight enemies it can’t see, but also is incapable of using traditional shield systems. Each has their place and suits a different sort of player.

As is standard in the space combat realm, most of your equipment is related to destroying enemies, while not being destroyed yourself. Every ship has four different equipment types to handle this: primary weapons, secondary weapons, devices, and consumables. Primary weapons draw from a ship’s energy (which recharges quickly when not in use), and include things like gatling guns and different laser weapons. Secondary weapons are powerful, but can only be loaded in limited quantities and are generally different types of missiles. Devices can be active or passive in nature, and provide a wide variety of supporting effects. These can be quite basic, like shields, cloaking devices, passive armor, or increased energy reserves. They can also be more specialized, like enhanced sensor arrays for finding equipment and resources, drone overrides to make enemy drones fight for you, nanoextractors that damage specific ship components to repair your hull, or energized boost systems that drain your shields, but amp your speed up. Consumables provide temporary enhancements for sticky situations:

As you play, you’ll acquire blueprints that allow for the direct crafting of new equipment and upgrades, and perks purchased with credits between runs can start to make your life easier over time.

The ease with which one finds new equipment does remove some of what I think defines roguelikes: permanent choices made during runs that define how the game is played until the next death, but it suits the setting better to feel like a scrapper in a small ship, scavenging the most useful pieces for yourself. I do wish the moment-to-moment gameplay had more permanence, but outside of selecting which areas to jump to, it’s relatively easy to alter your loadout or style on the fly, which might make the game more attractive to those not used to the constraints of traditional roguelikes.

Speaking of which, the other way in which this game is unlike other rogulikes is in the base gameplay itself. Flying your ship around is snappy, and the controls are very responsive, if a little difficult to adjust to at first. If you’re like me and have played games like this on a HOTAS setup (joysticks and throttles), be prepared for a jolt. When I first started, it was easy enough to get around in the lulls, but once the action started up, I would frequently find myself either rotating in one spot, or crashing into assorted asteroids.

Though I think the ideal way to play the game is in third person, I highly recommend playing the game in first person to get started. Doing so helps to adjust to the way the thumbsticks are laid out: left stick moves the ship vertically and horizontally, the right stick pitches and yaws, while the left trigger and bumper move your forward and backward, respectively. You’ll be boosting around turret-filled wrecks and fighting off pirates in no time.

Just don’t be turned off by the lack of minutiae in dogfighting. Elite: Dangerous might have you adjusting reactor outputs on the fly, but other than managing your remaining energy, you’ll pretty much just strafe to avoid getting shot, and aim at the lead indicator to kill whatever is trying to kill you. It is satisfying to use a shock rifle from a distance to wipe out an enemy shield in one shot, boost forward, and spool up the gatling guns to tear the hull apart, but there’s a decided lack of the little things that made games like Freespace so intriguing (to me).

Enemy ships, for example, might have different names, but are functionally all incredibly similar. They can see you from an insane distance, as well, so stealth isn’t a particularly valid option. Since all the enemies are about as quick as you are, getting into a proper pursuit takes a back seat to just strafing and shooting, with two ships basically orbiting each other until one explodes. Target priority becomes much more important than anything else: kill drones, then fighters, for instance. 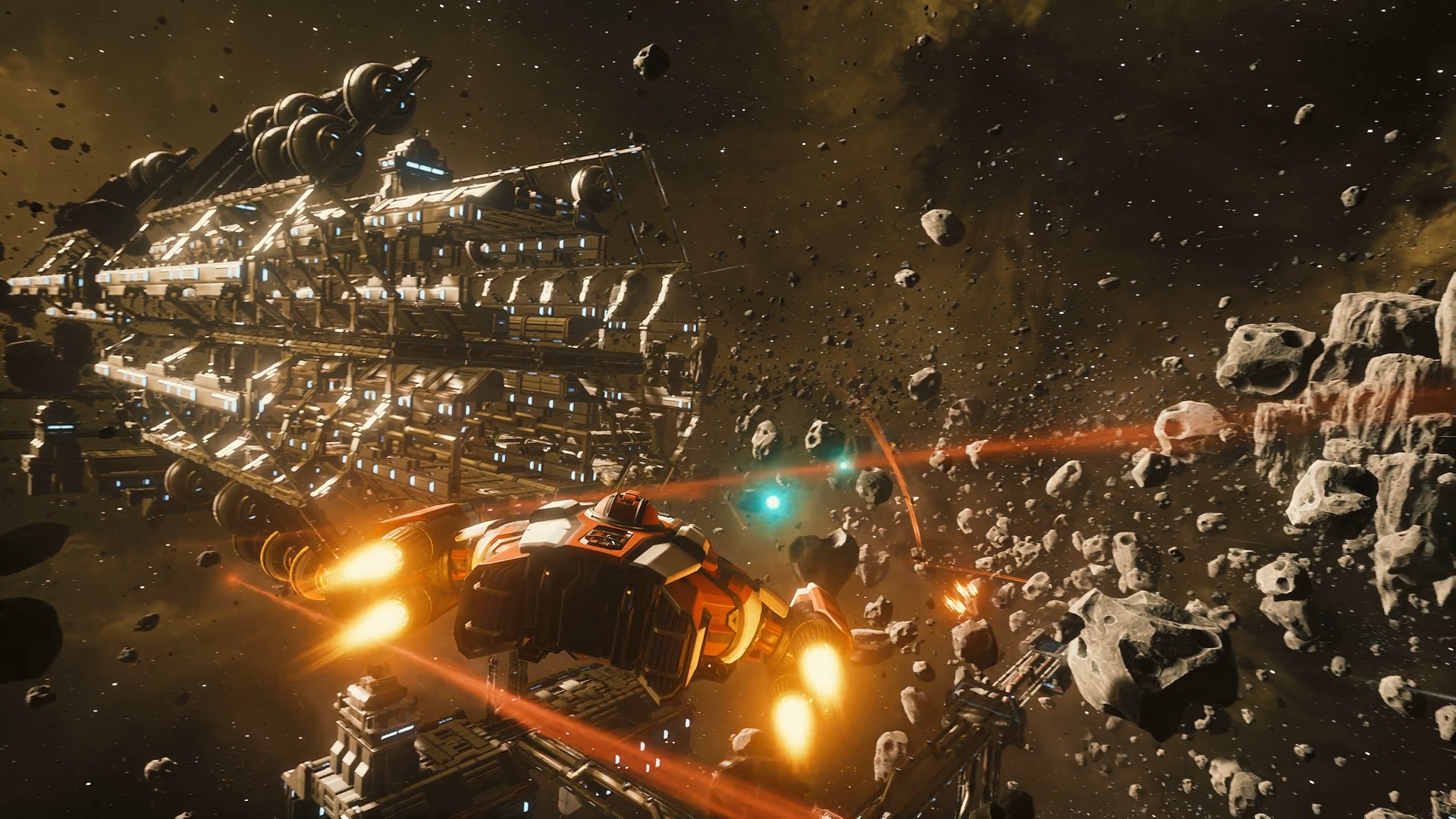 I’m not sure how much longevity can realistically be had from this game as a result. It’s nice when I scoop up a piece of equipment I’ve never seen before, but with essentially 18 primary weapons, and even fewer secondaries, it doesn’t take as long as one might hope to see everything the game has to offer—pretty though it may be. I have hundreds of hours in other roguelikes, but I simply cannot see myself saying that about EVERSPACE, despite the fact that I’ve thoroughly enjoyed the time I’ve spent with it so far.

There is an expansion, EVERSPACE Encounters, but I haven’t had a chance to pick that up for the install. It adds new ship skins, six more primary weapons, and a smattering of new equipment. Without playing it, I can’t judge its worthiness, but my gut says that the base game would have benefited greatly from an expanded equipment set.

Given that the game comes with a $30 price tag, it might depend heavily on how much your value the hour-to-dollar conversion rate on whether it’s worth the pickup for you. It’s fun, and a very valiant and impressive debut for development studio Rockfish Games. You can snag EVERSPACE on Steam, PS4 or Xbox One.