Every self-respecting nerd knows that the first trailer for Stephen Spielberg’s movie adaptation of the “holy grail of pop culture,” Ernest Cline’s Ready Player One, dropped Saturday at San Diego Comic-Con. After several very determined viewings –you could call it obsessive – I tried to find every single Easter egg hidden inside the two minute and four second trailer, and as a die-hard fan of the original novel, you could say I’m a little giddy at what I found.

In case you haven’t read the book—in which case you should drop whatever laptop, phone, or tablet you’re reading this one right now and go read this nostalgia-filled geektastic MASTERPIECE—here’s a brief synopsis:

Set in the year 2045, the world is on the brink of apocalypse and civilians live in a state of chaos and loss for hope. Fortunately, they have the OASIS, a virtual reality universe similar to those we’ve seen in our favorite MMORPG’s. The OASIS was created by the brilliant James Halliday (Mark Rylance) who has since died and left behind an incredible fortune to the first person who can find his digital Easter egg, hidden somewhere within the OASIS. Wade Watts (Tye Sheridan), our underdog hero, decides to take on Halliday’s quest and is hurled into a massive treasure hunt riddled with clues (most of which are references to nerdy 80’s pop culture) and we follow his thrilling adventure through the fantastical universe of the OASIS.

In the trailer’s intro, we see Wade spiraling down his home of “The Stacks” in Columbus, Ohio, running off to his hideout where he spends most of his time inside the OASIS. We get a small glimpse into his world as he passes an open window where we see a woman dancing by a stripper pole, IOI visor covering her eyes, no doubt consumed by the alluring world of the OASIS. Here are the Easter eggs that follow:

The music that plays during the first half of this trailer features nods to the classic tune “Pure Imagination” from Willy Wonka and the Chocolate Factory. (Have another listen, you won’t be able to un-hear it). It’s no surprise, considering Halliday’s treasure hunt is very similar to Wonka’s legacy in the classic film.

As soon as we see Wade enter the OASIS—which by the way is one of the most awesome shots I’ve EVER seen—we then see his blond-haired avatar, Parzival, walking into what looks like Ogden Morrow’s ’80s Dance Party in the Distracted Globe, a digital nightclub in the OASIS, where people are dancing in the air above him. On the way through the door, you can see a pair of silhouettes to his left that look strikingly like DC’s Harley Quinn and Deathstroke. Though these characters aren’t in the book, I’m sure we’ll see several more DC characters floating around due to the fact that Warner Bros. is producing this film.

In that same scene where we see dancing figures floating above Wade, one of those dancing figures is unmistakably Gandalf from The Lord Of The Rings. Apparently, the other figures are all Warner Bros. characters, but I haven’t been able to discern them just yet.

We all knew Spielberg wouldn’t be able to get the rights for everything in Cline’s novel, an unfortunate downside to having a Hollywood adaptation, but I don’t think fans are too upset about the Iron Giant’s appearance in the film. It’s pretty obvious that our favorite Superman is a major player in the film, most likely replacing Leopardon or Ultraman in the battle of Castle Anorak. Personally, I really want to see the Iron Giant go head to head against Mechagodzilla. Holy geekgasm, Batman!

We also see two figures crest the hill alongside the Iron Giant, whom I believe to be Parzival and Karatsu Akihide, more commonly known by his avatar name, Shoto.

Around the 00:55 mark, we see a figure (who I thought was Parzival, but looks more like Napoleon) riding a giant mecha-scorpion and being attacked by little dudes on ostriches wielding lances. Something shoots one of the ostriches and it transforms into a green egg, referencing the classic 1982 arcade game, Joust. Joust plays a very important role in the novel, however it is shown in a much different scenario here, letting us know that this may not be the shot-for-shot adaptation of the book that fans are looking for.

Okay, so there’s a lot going on in this shot. Some kind of cybernetically augmented beast (apparently Aech, though it looks nothing like how his avatar is described in the book) is wielding the Halo assault rifle and mercilessly blasting away other avatars, who as we know can take the form of any pop culture icons like the ones we see here: Freddy Kreuger and Duke Nuke ‘Em are all taken down by a few blasts from Aech’s gun, and when Kreuger is vaporized into a million pixels it looks like he transforms into coins that shoot into Aech’s avatar Scott Pilgrim style. A third character is also taken out by Aech (on the left), but it’s difficult to tell who it is just yet…the only guess I have is Blaster Master maybe?

Just to confirm our suspicions, that guy with the Halo assault rifle is definitely Aech. The badass ogre-looking avatar is spotted with the name “AECH” written on his chest.

We get a nice good look at the Sixers, IOI’s operatives who are also out to find Halliday’s treasure, sporting their anonymous 6-digit ID numbers that all start with the number 6 and “IOI” plastered across their robotic faces.

Just as the Sixers appear, we hear the sweet, sweet sound of Rush’s “Tom Sawyer” setting the scene. Rush plays a huge role in the novel so it’s awesome to see that it’s definitely going to be the soundtrack to this film.

As the Sixers are all running out to their identical IOI cars, a few other cars can be seen including The Plymouth Fury “Christine” from Stephen King’s novel, the red Formula 1 sports car from Atari’s 1980s Pole Position, the van from The A-Team, and the modified Ford Falcon “Interceptor” driven by Mel Gibson in the 1979 Mad Max film. In this shot we also catch a glimpse of Dizzy from Gears of War talking to Tomb Raider’s Lara Croft.

Some people have apparently seen the Batmobile in this shot as well, but I still can’t seem to find it. However, it is definitely possible due to Warner Bros. affiliation with the film.

“WIN THE COPPER KEY” can also be seen on some billboards in the background, referencing Halliday’s hunt to find the keys. 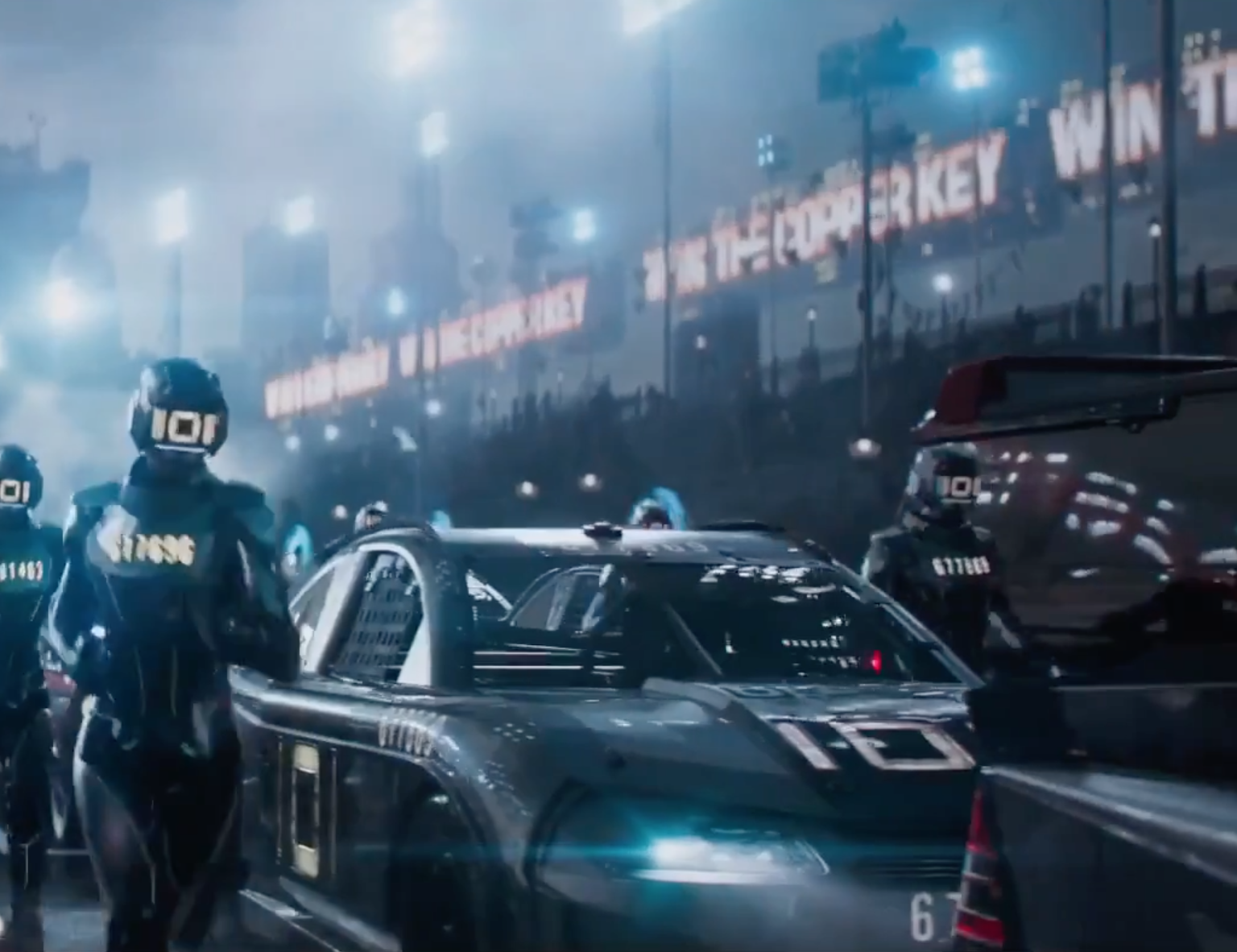 BIGFOOT AND THE GREATEST EASTER EGG OF ALL TIME

Aech blasts through a handful of IOI cars behind the wheel of none other than the 1980s monster truck Bigfoot, hauling an American flag in its bed.

Also, perhaps the COOLEST Easter egg in this entire trailer happens during this scene. On the hood of the IOI car that Bigfoot crashes through, there is a QR code that, when scanned, leads to the website Join The Quest, which currently only features Wade wearing his IOI visor and links to the film’s social media sites. However, this clue has fans (and myself) excited that perhaps there will be more clues to come and fans of Ready Player One can participate in their own treasure hunt, much like Halliday’s. (Don’t mind me, I’m just geeking out over here.) 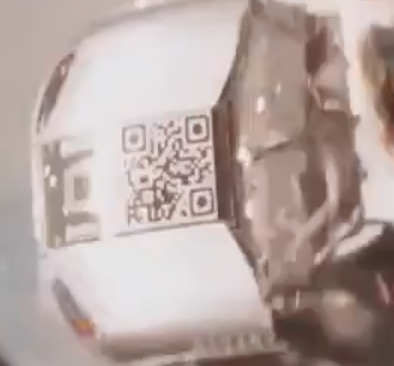 One of the most badass shots of the trailer features the red motorcycle that belonged to Shotaro Kaneda in the 1988 anime Akira. At first I thought maybe the rider was Nolan Sorrento, the Sixers’ chief egg-hunter trying to gain corporate ownership of the OASIS by winning the game, but upon closer inspection I noticed the figure was definitely a girl and there is also a Hello Kitty sticker on the side of the bike, making me think this may in fact be Art3mis.

When Doc Brown’s time-traveling DeLorean rolled onto the screen, I may or may not have squealed…loudly. The DeLorean makes several appearances in the novel, so it’s great to see that it will appear on screen as well. It’s definitely being driven by our hero, as you can tell by the vanity license plate that says “PARZIVAL.” It doesn’t look like the car got all the upgrades that Parzival gives it in the book (like the Ghostbusters logo), although it does look like the red Knight Rider scanner is in fact on the grill of the DeLoreon, just like in the book.

When the title is finally revealed, try to contain your nerdy excitement and take a closer look: the “READY PLAYER ONE” text is a maze, and if you follow it you’ll come to a tiny egg inside the letter “O.” In the famous words of Bill and Ted: Egg-cellent!

And last, we catch a glimpse of the real treasure in Ready Player One: the crystal key that ultimately unlocks ownership of the OASIS. Honestly this shot is so sexy it might be NSFW.

Also be sure to check out Steph Cozza’s Video Review