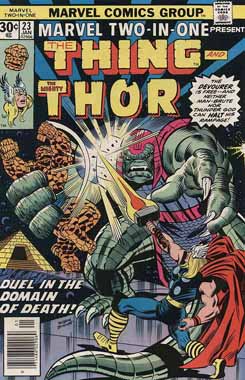 the Thing – Benjamin J. Grimm was bombarded by cosmic rays in a space exploration flight, alongside three friends. The cosmic rays gave each of them different powers, and they formed the Fantastic Four. Ben underwent the most physical change of the foursome: his skin mutated into orange rock and, as a result, he gained super-strength. At this point in Marvel Continuity, Ben Grimm was reverted back to human form but he operated an exo-skeleton armor created by Reed Richards that was made to look exactly like the Thing.

Thor – When Doctor Donald Blake stomps his cane against the ground, he is replaced by Thor – the Asgardian God of Thunder. Thor is possessed of super-strength, armed with an enchanted hammer (named Mjölnir) and can summon forth lightning.

After being worn down by Seth‘s army of the dead, Thor and the Thing are transported to the Golden Paths of the Gods (the Egyptian version of Bifrost – the Rainbow Road to Asgard) by the Egyptian God of Death. They follow the path to Heliopolis where the other Egyptian gods (notably Horus, Isis & Osiris) have already fallen captive to Seth. The God of Death summons the Devourer to destroy his remaining enemies: the Thing and Thor. 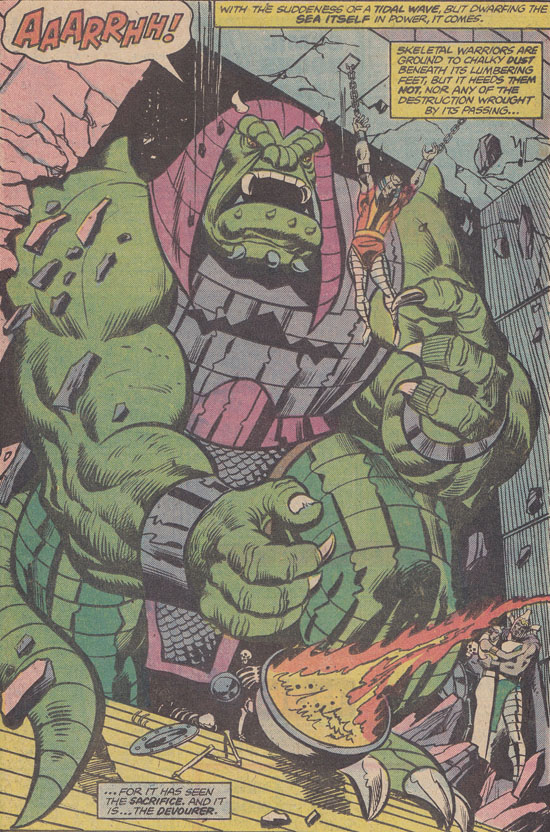 But, Seth was not counting on the uncontrollable nature of the Devourer. The great beast cares not what its target is – and even Seth himself is assaulted by the creature. In a desperate move, the Death God releases his step-brother, Horus, for he was the one who had previously imprisoned the Devourer. Remembering his long imprisonment, the Devourer‘s attention shifted to Horus and so, the Thing used him to lure the Devourer out into deep space. Thor flung his hammer to return the Thing (and Horus) back to Heliopolis, leaving the monster stranded in space.

The battle takes place in Heliopolis – the home of the Egyptian pantheon. 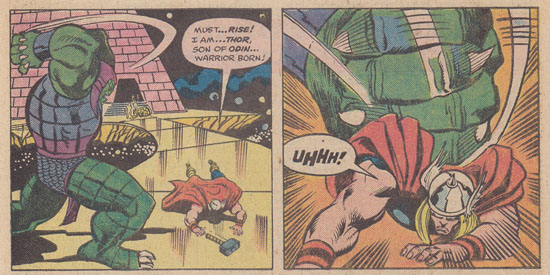 Seth is next seen in Thor Annual #10 (from 1982) where he and other Death Gods (like Pluto, Mephisto and Hela) decide to unite their realms in a bid for power.

WHY is Thor the guest-lead?

Bill Mantlo ended his run on Thor in November 1975 with a Seth story. This story allowed him to utilize that villain again as well as the title character.

After the set-up of last issue, this one proved to be a lot of fun action. After all, it’s always fun to see the Thing take on giant monsters that are bigger than he is. I really enjoyed the short-sightedness of Seth – who didn’t realize that unleashing a giant monster on Heliopolis might put him in danger as well. And, I’m glad to see that Blacksun wasn’t forgotten about – in the last panel, Doctor Blake prepares to examine the patient.