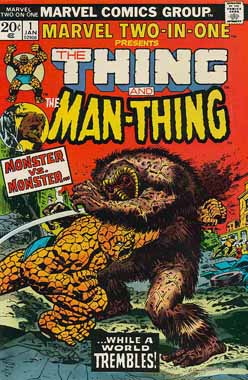 Man-Thing – Ted Sallis was attempting to rediscover the Super-Soldier Serum when he injected himself with the experimental formula. Soon after, his car crashed into a chemical-tainted swamp – the mixture of formula, swamp water and chemicals turned him into the Man-Thing. Now, he is a mindless muck monster, unable to process thoughts but highly empathic. The swamp beast is drawn towards strong emotions and has an unusual reaction to one in specific: for, whatever knows fear, burns at the touch of the Man-Thing.

The Molecule Man (II) teleports to Earth in an effort to take revenge on his father’s enemies, the Fantastic Four. He homes in on the Thing’s energy first, which deposits him in the Florida Everglades, where the rocky FF member is tracking down the Man-Thing. He engages the Thing and their scuffle quickly draws the attention of the Man-Thing.

Using his advanced abilities, the Molecule Man (II) can also manipulate organic molecules, as well as inorganic (a feat his father could never accomplish). And, it’s with those abilities that he transforms both the Thing and the Man-Thing into their human forms, Ben Grimm & Ted Sallis, respectively. With the strongest threats to his mission now neutralized, the Molecule Man (II) departs to take out the other three members of the Fantastic Four.

Grimm & Sallis soon catch up with him and he foolishly changes them back into their monstrous forms. During the fight, the Thing separates the villain from his wand, the power source that keeps his body from disintegrating. Unfortunately for him, he’s kept away long enough that his body is turned into dust … and the wand, which now appears powerless, is left in the hands of a small child.

After the events of Marvel Feature #11-12, the hot-headed Thing travels from New Mexico to the Florida Everglades to take on this “new guy on the block” who stole his name. Little does he know, at first, that the swamp creature can’t even think or speak – let alone tell others to call him the Man-Thing.

WHEN does the Molecule Man next appear?

This Molecule Man doesn’t appear again but, his father (the original Molecule Man) returns in Iron Man Annual #3, where it is revealed that his essence was inside the wand.

WHY is Man-Thing the guest-lead?

After debuting in Savage Tales #1 (May 1971), the Man-Thing went on to take the lead feature in Adventure Into Fear, starting with #10 (October 1972) and continuing to #19 (December 1973). Steve Gerber’s tales of the swamp beast had proved popular enough to be given its own title, and Man-Thing #1 debuted with a cover date of January 1974 – conveniently enough, that’s the cover date of this issue, as well. So, it seems this comic was meant to serve as a promo for his series debut.

Gerber introduced a neat concept by changing the two monsters back into their human forms. I wouldn’t have minded a lot more of the book devoted to the interesting character moments that companionship could have provided. Think about it – two disgusting monsters have been granted a rare opportunity to be back in their own skin AND they have someone with them that has gone through the same experience! That’s great stuff, there. Especially since that’s not too common a trait to share with somebody else.

Now, I realize that Ben Grimm is a heroic character so he’s pretty much duty-bound to take on the villain who’s out to get him and his friends but, I feel like Ted Sallis would have logicly just fled the scene instead of putting himself in a position to be transformed back into the mindless Man-Thing. At least the Thing retains his own mind when he’s in his rocky form – the Man-Thing can’t even process thought! But, I think the biggest blunder of the story is when the Thing just hands the Molecule Man’s wand over to a little boy. C’mon! Everybody knows you can’t just go leaving stuff like that around. 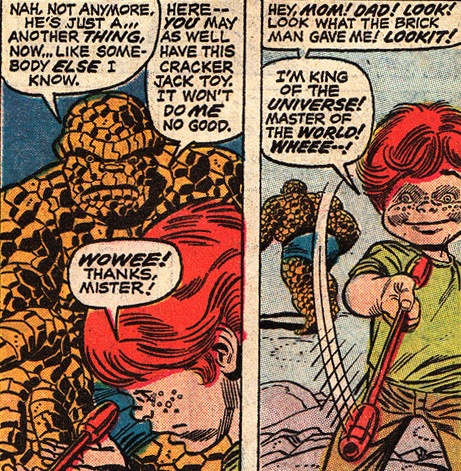 Note: This issue’s letters column features commentary on Marvel Feature #11 (the debut of the Two-In-One concept).