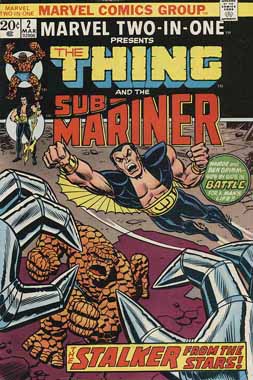 Sub-Mariner – Namor is the hybrid offspring of a human and an Atlantean. This ruler of Atlantis has super-strength (as long as his skin is wet) and can fly (thanks to those dainty ankle wings!). He’s also got an enormous chip on his shoulder.

Wundarr – The planet Dakkam’s greatest astronomer, Hektu, believed that their sun would go nova, destroying their world. So, he put his newborn son, Wundarr, in a rocketship that landed on Earth. The child grew within the ship, never knowing of the outside world until the ship was opened by the Man-Thing. Wundarr emerged fully matured in body but not in mind. He possesses super-strength, some flight ability (or is it leaping?), and an “entropy field” that nullifies energy.

Wundarr crashlands near Hydrobase where he strikes a friendship with the curious Namorita. But, when Namor comes to investigate the newcomer, Wundarr is scared off. He next crashlands right in the middle of New York City Traffic! (Sheesh! This guy needs to learn how to leap better, eh?)

The Thing, who just happens to be nearby, notices this and launches into an attack to prevent any other New Yorkers from harm. Meanwhile, Namor and Namorita have journeyed to New York City to find Wundarr. When they discover their friend in battle with the Thing, they rush to his aid. And, to complicate matters even further, the enemies of Hektu send the Mortoid (a robotic assassin) to destroy Wundarr. This newfound threat unites the Thing, Namor, Namorita and Wundarr – the Mortoid and the Dakkamites are defeated.

After the threat has been neutralized, Namor and Namorita explain to the Thing that Wundarr needs a “father figure” to teach him about the world, just before they depart to return to Hydrobase.

The initial events take place just off the shore of Hydrobase, which is located off the North American coast in international waters. But, the scene quickly shifts to New York City (42nd Street, to be exact), once Wundarr makes his way to the mainland.

WHEN does Wundarr next appear?

Wundarr will be around in the very next issue! Steve Gerber, the writer of this series, created Wundarr in the pages of Fear, so it’s safe to assume that he had some plans for the character’s growth. It’s not often easy to put a new character in the spotlight, so this seems like an appropriate place to add him as a supporting character. 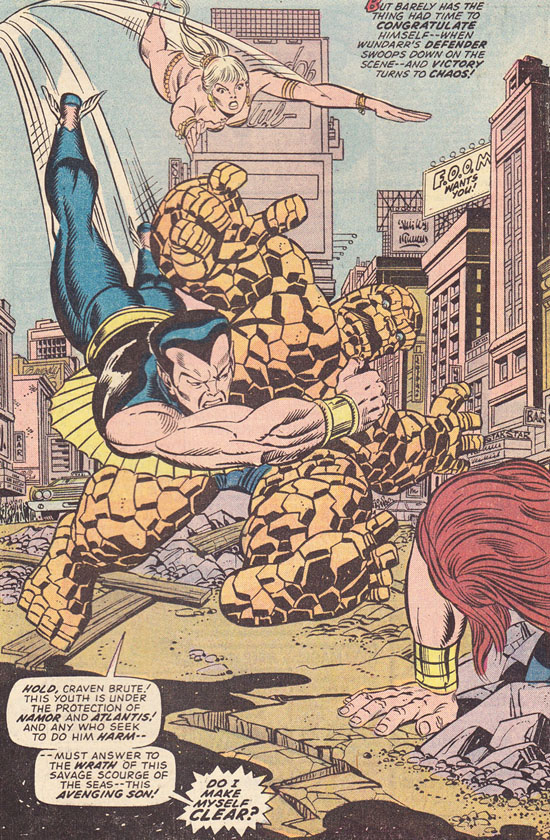 WHY is Sub-Mariner the guest-lead?

In 1968, the Sub-Mariner had split from his double-feature title, Tales to Astonish (which he shared with the Hulk), into his own solo title. By 1973, sales of that title had begun to falter, and then-writer Steve Gerber was given enough slack to send the series in a “new direction” starting in issue #67 (cover date: November 1973). It could easily be argued that this issue was an attempt by Gerber to get Namor the Sub-Mariner (and his new costume), some much-needed exposure. Sadly, the plan didn’t work and Sub-Mariner was canceled with issue #72 (cover date: September 1974). 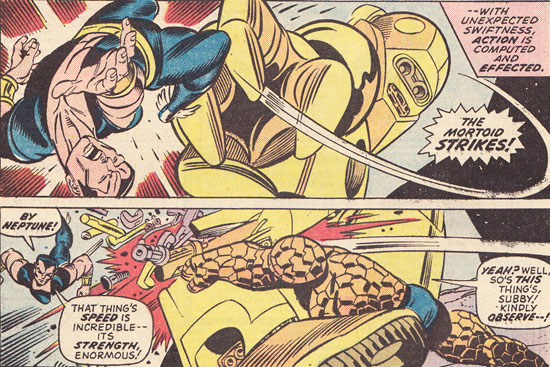 The re-introduction of Wundarr is an interesting treat. Essentially, he has the same origin story as Superman but, he’s got a unique slant: full-grown body run by an infantile mind. I’m curious to see how the character develops now that he’s been left in Bashful Benjy’s hands.

Speaking of that, it seems a little odd that Namorita (who’s really the only character in this story that shows any true care for the Dakkamite) would leave Wundarr with the Thing. To be honest, the way the story had progressed, I assumed that she would be taking him back to Hydrobase. 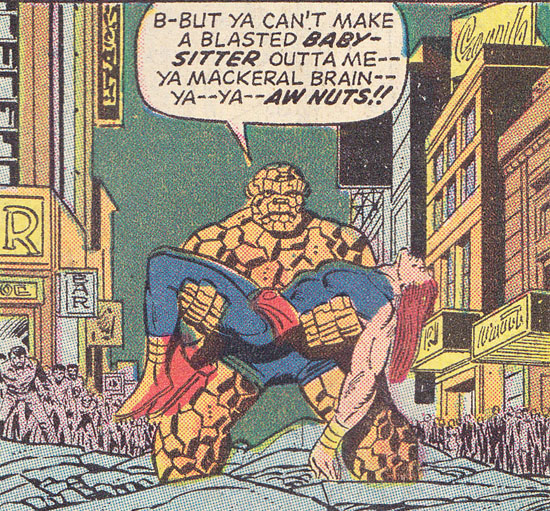