midnight movie, New Year’s Eve style! it’s tradition if I’m hanging at the house on NYE to watch 200 Cigarettes. it’s an uber cheesy movie about people making that last connection on NYE in New York City in the year of 1981. it’s filled with 80s speak and stereo types but there are some touching moments. (however the movie is about as deep as a puddle) the cast is an all star line up of indie big hitters including and of course Paul Rudd who just is so fucking adorably obnoxious. it’s not an outstanding movie, but it is fun and makes for great noise on a NYE. btw, thanks to all who have been following along with these midnight movie posts. I don’t know if it has much impact on what you watch, but the numbers on the aggressive comix websites and the feedback I get on Instagram are encouraging and I’ll keep it going into the new year with more 80s cult classic but also some obscure and foreign films too. Mad Love n Respect to all, happy new year!!

Be on the pulse of what movie we are watching at midnight by following Taffeta on her instagram! 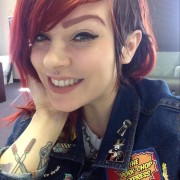