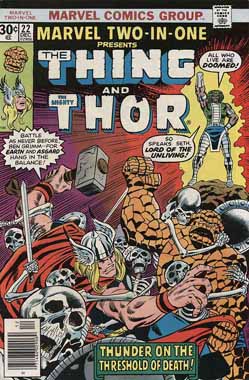 the Thing – Benjamin J. Grimm was bombarded by cosmic rays in a space exploration flight, alongside three friends. The cosmic rays gave each of them different powers, and they formed the Fantastic Four. Ben underwent the most physical change of the foursome: his skin mutated into orange rock and, as a result, he gained super-strength. At this point in Marvel Continuity, Ben Grimm was reverted back to human form but he operated an exo-skeleton armor created by Reed Richards that was made to look exactly like the Thing.

Thor – When Doctor Donald Blake stomps his cane against the ground, he is replaced by Thor – the Asgardian God of Thunder. Thor is possessed of super-strength, armed with an enchanted hammer (named Mjölnir) and can summon forth lightning.

The Thing and the Human Torch decide to try and save the fallen villain, Blacksun (he seemed to have overloaded his body with energy last issue). They suspect that the closest doctor of great renown is Doctor Donald Blake but little do they know that a mysterious figure is also looking for him. This hooded menace has invaded the hospital that Doctor Blake is currently working in – demanding to see him. The nurses and other assistants flee when the villain finds Doctor Blake, leaving Don free to strike his cane and become Thor. The thunder god releases hurricane force winds against the mysterious figure, stripping him of his trenchcoat and revealing Seth, the Egyptian God of Death. 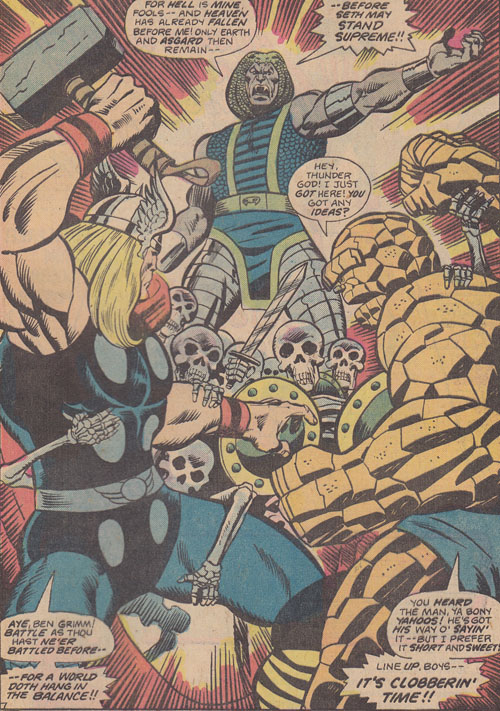 Meanwhile, the Thing and the Human Torch have arrived at Blake’s hospital just as the hospital staff is running out – scared out of their wits. Back at the battle, Seth reveals that Heliopolis (the city of the Egyptian gods) has fallen to his forces – Earth and Asgard are his next targets. Just as his plan is revealed, the Thing bursts into the room. But, lest you thing Seth is outnumbered, he quickly summons up his army of the dead!

Seth will appear next issue since this story is to be continued. 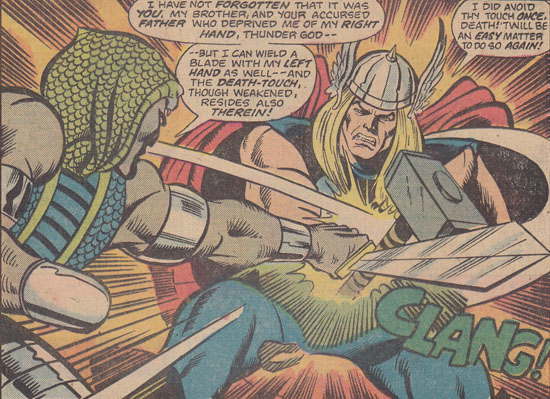 WHY is Thor the guest-lead?

Bill Mantlo ended his run on Thor in November 1975 with a Seth story. This story allowed him to utilize that villain again as well as the title character.

This issue was a little better than average. It seemed a tad too coincidental that the Thing is seeking Blake’s help just as he’s being attacked by Seth – but I can get over that. I’m curious to see if Blacksun is actually going to get help or if he was just used as an excuse to get the Thing to seek out Blake (Thor’s host). The biggest qualm I had was the Human Torch attempting his version of cryogenics on Blacksun’s body with extreme heat. Now, I’m not scientist but I highly doubt that the exact opposite process could be used to induce cryogenic freezing.