Marvel Two-In-One launched in 1974, teaming the Thing with a different hero each month. This guide will tell you everything you wanted to know about the series – and more!Spoilers appear below – You’ve been warned! 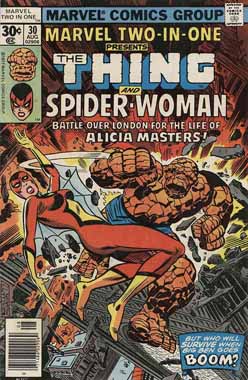 Spider-Woman – As a child, Jessica Drew was lethally poisoned by radiation. To save her life, her father injected her with an experimental serum (devised from an irradiated spider’s blood) and then placed in a genetic accelerator by the High Evolutionary. When she emerged, she found that she had developed a number of super-powers including super-strength, speed, immunity to poisons and the ability to generated a “venom blast”.

While Doctor Kort is working on saving Deathlok, the Thing and Alicia Masters decide to explore London some more. Not much later, a ruckus at Westminster Abbey calls the Thing’s attention – where he discovers two thieves (Trevor & Chauncy) have put down the authorities with sleeping darts and are now trying to cut through the floor with a laser-torch. Almost as quickly as the Thing shows up, so does Spider-Woman. She reveals that Hydra has assigned her to destroy the Thing – and her distraction gives the thieves enough time to lift the slab of floor up and steal a silver plate that was hidden underneath. After they get away, Spider-Woman decides that the Thing is stronger than she has been told and makes a strategic withdrawal. 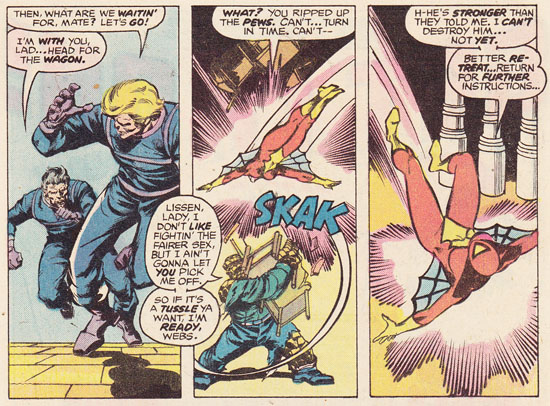 Afterwards, the Thing is debriefed by the local authorities and then has a tele-conference with Nick Fury, who asks Grimm to capture Spider-Woman for S.H.I.E.L.D. Hours later, the Thing and Alicia Masters resume their tour of London – but, again, it doesn’t last long. Spider-Woman swoops in an abducts Alicia. As he gives chase, he runs into Trevor and Chauncy (they’re out looking for their next “clue”), who hit him with a blast of sleeping gas. They proceed to steal their last clue, a golden plate and then exit Scotland Yard with an awakened Ben Grimm hot on their tail. Luckily for them, the Thing catches a glimpse of Spider-Woman and he takes off after her in order to get Alicia back.

By the time the Thing catches up with Spider-Woman, she’s stashed Alicia away somewhere. As they do battle atop Big Ben, they’re blasted by an explostion set off by Trevor and Chauncy – the thieves are excited that the treasure they seek lies very near!

The story takes place in London and hits upon a lot of their big tourist attractions like Picadilly Circus, Big Ben, Westminster Abbey and Scotland Yard.

The villainous group, Hydra, appears in the very next issue as their plans with Spider-Woman continue.

WHY is Spider-Woman the guest-lead?

Spider-Woman debuted in the penultimate issue of Marvel Spotlight (February 1977) and then subsequently appeared in the previous issue of Marvel Two-In-One. Her story continued into this issue and will continue into the next couple issues, as well – all, it seems, as a way to grab attention for her own series (also written by Marv Wolfman), which debuted in April 1978. It went on to last for 50 issues! At the time, she was the first Marvel heroine to have a solo series last that long. (That record was later broken by She-Hulk [60 issues] and Spider-Girl [100 issues]).

The locale is certainly an interesting change for this title, which is usually based in New York City. Since Spider-Woman is still being controlled by Hydra, she’s essentially the villain of this story (even though she gets billing as the guest-star on the cover). Because of that, the Thing gets an inordinate share of limelight throughout this issue. It leaves room for a lot of exploration of his relationship with Alicia as well as a fun exchange with Nick Fury. Wolfman does a good job of interspersing these two thieves throughout the issue (what are they searching for?!) and provides insight into Spider-Woman’s hesitant bondage to the will of Hydra.