Horrorhound Weekend is celebrating ten years of horror conventions as it heads into yet another fantastic line up with Indianapolis 2015.

It all takes place at the Marriott Indianapolis East every September.  This fall is not only celebrating an anniversary for the convention itself, but is also a reunion of sorts for some very key Nightmare on Elm Street alumni. Freddy himself (Robert Englund) is the guest of honor and is slated to do professional photo-ops. Lo-Pan (James Hong) of Big Trouble in Little China is also one of the amazing guests listed to appear. Horrorhound always puts together a great convention with not only fantastic vendors and celebrity appearances, but a fantastic after party and entertainment as well. The fall edition of this convention is known for its pajama party where celebrities have shown up to tell all the adults in their Underoos and onesies a bedtime story. After that DJ Joel rips into some metal, industrial and indie rock  for a dance party. On Saturday, they host “Night Terrors” and feature live music from regional punk and rock bands as well as additional vendors that are not a part of the regular show floor. Mask Fest is also a great feature with lots of mask creators and makeup artists including cast members from Face Off. The collection of independent films shown at Horrorhound is also fantastic. If there is an independent horror film you have been dying to see, chances are you will be able to screen it and/or buy it here. Weekend passes for this event are still available online for $40 at www.horrorhoundweekend.com Many of the hotels in the area book fast but there are still area hotels available if you are coming from out of state. Horrorhound Weekend is not to be missed for horror nerds. Come see us there to be a part of our cosplay gallery. Also as a tribute to Wes Craven, who has recently passed, Freddy cosplay has been highly encouraged.  Hope to see some of you there!!! 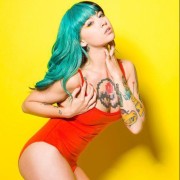