Guy Ritchie’s style isn’t for everyone.  If you already know you don’t care for his visuals, for his cockney rough and tumble directorial style, then this probably isn’t the film for you.  That said, taking a legend so many know and love and pushing into a different realm?

King Arthur isn’t your average Merlin and Arthur buddy adventure flick, but it also isn’t the majesty of Excalibur either.  It’s something in between, with the slick and young presentation Richie has made himself known for.  Also, David Beckham in really good dark ages scar makeup.  Don’t let the British press fool you, the scene he’s in isn’t THAT bad. You can watch it here.

The film follows the days leading up to King Uther (Eric Bana) Pendragon’s end and subsequent death at the hand of his brother (yeah, I know) Vortigern (Jude Law).  If you know these names, I apologize in advance for what you’ll experience in the film, because the overall use of characters and mythos is more like guidelines rather than rules.  Such as the evil all powerful wizard who King Uther defeated was Mordred.  Because that’s how time dilation works?  I guess?  (If you don’t know, in Arthurian legend, Mordred is the bastard son of Arthur and his half sister, enchantress Morgana Le Fae, and so obviously didn’t exist before his father was crowned king.)

Anyhow, brother Vortigern goes mad with power (literally), making a deal with the dark and slithering forces that live beneath the foundation of his castle on a hill. He sacrifices his wife in order to gain the darker powers of magic, after rounding up and burning all the mages in the land. (Merlin isn’t a player in this, by the way, so don’t expect to see him.)  Vortigern stages a takeover of Uther’s castle of Camelot (no, really) and kills Uther’s wife (not the Lady Igraine) in front of young Arthur.

In probably the most brilliant change, when Uther falls to Vortigan’s attack, he throws his Merlin-forged sword of power into the air and lets it fall into his back, wherein he transforms into a giant stone, encasing Excalibur and sinking to the bottom of the lake.

Arthur does a Moses and is found in the river in Londinium (a nice touch, but London didn’t have a Circus Maximus guys, but nice touch for the Roman occupation tie in from the previous King Arthur movie) and is raised in a brothel by hookers with hearts of gold.  Arthur becomes a gang leader of sorts, the true Ritchie style of Lock, Stock, And 2 Smoking Barrels and Snatch making appearances with the storytelling and visual fill ins oddly fitting for this version of the golden king.  Arthur’s London crew consists of Black Lack (Neil Maskell), Wet Stick (Kingsley Ben-Adir), George (Tom Wu), and Black Lack’s son Blue (Bleu Landau), and they more or less keep him alive through the majority of the action. Sir Bedevere (Djimon Hounsou) and Goosefat Bill (Aidan Gillen) join and round out the ‘crew’ later on, but become core members of the team.

It’s worth noting the choice in King Arthur: Legend of the Sword to have Guinevere be a mage (Astrid Bergès-Frisbey), and a pretty badass mage at that.  She controls animals, she creates potions, she inhabits snakes and eagles.  I’m already excited for a sequel just to see what she does in the next film, and because there wasn’t a ‘romance’ between she and Arthur.  She also saves his ass more times than anyone else.

The Good:  If you enjoyed Ritchie’s Sherlock Holmes in feel and audio offerings, then you’ll really enjoy Arthur.  While not Hans Zimmer at the original score helm, there are inklings of his style with the use of banjo and drums of war.  It’s pretty weird to hear Charlie Hunnam use his actual accent in a film, he’s been playing the Americanized badass (anti)hero so often, you almost forget he’s English, but he’s a delight in the role.  You want to see him succeed, you want to see him kick Jude Law’s smug ass, and you actually WANT to see what happens after the film’s conclusion.

The Bad:  If you are WAY into Arthurian lore, you’re going to have issues.  Pretend you know NOTHING other than the names and the basic outline of everything (no Uther raping anyone in this film) and you may enjoy it.  I’m more than passingly familiar with the legends, and once I remembered this in no way shape or form was going to be THOSE, I enjoyed the hell out of it.  The script at times is of course horrible, but the lack of dialog in the magical and supernatural moments saves that .75 on the score for me.  The Nightshade song and snake sequence ESPECIALLY. 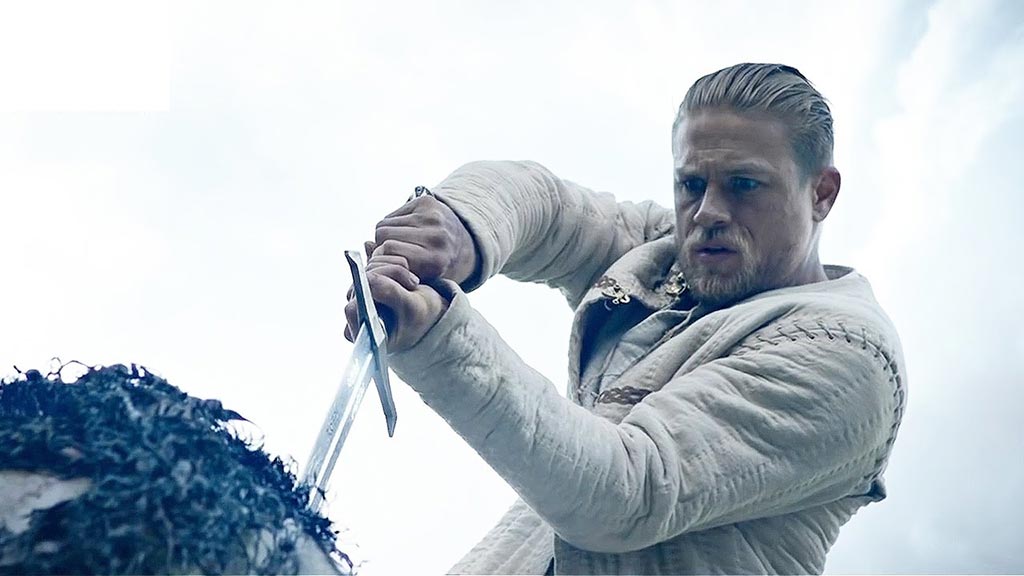 King Arthur: Legend Of the Sword isn’t the worst Guy Ritchie film, but it isn’t his best either.  Somewhere in the middle of his hooligan tales, the film is entertaining and reminds us not all high fantasy needs to be as soap operay as Game Of Thrones nor as mindless fluffy as the  Shannara Chronicles.