There is some kind of special science fiction magic that happened when Ronald D. Moore brought his vision of the classic series Battlestar Galactica to life on December 8th, 2003.  If you’re curious about that particular date, it’s the first night the ‘mini series’ aired on the SyFy channel, back when it was still SciFi.  Needless to say, the show started with a bang, which reverberated until the “reimagined” version ended on March 20th, 2009.  Something special happened with the cast and crew, with the show, and viewers picked up on it.

A fanbase rose around the show, hosting Frak Parties (that have NOTHING to do with oil drilling, thankyouverymuch) on Fridays to view the newest episode in a friendly fan environment.  From those parties and meetings of friends came the Colonial Fleet.  Not all fangroups are created equal, and the Colonial Fleet is unlike any other group I’ve encountered.  A true sense of family and willingness to care for eachother no matter what, bonded together by a mutual love of a story and characters traverse states and even countries.

I’m talking about the Fleet because their special gathering event for many years (10 as of 2016!) happens to be DragonCon.  This could be because the convention is one big party; something I’ve described as a mix of nerdy Thanksgiving and geektastic Mardi Gras.  Really, it’s because when the actors/creators behind beloved (and sometimes hated) characters attend, they become a part of the family.  It happens occasionally that a fan happens to be at the same restaurant as an actor, words of thanks are often exchanged.  BUT HOW OFTEN TO THEY SHOW UP TO THE FANGROUP PARTY?  (More on this in a bit)  It seems to be something that exclusively happens at DragonCon. 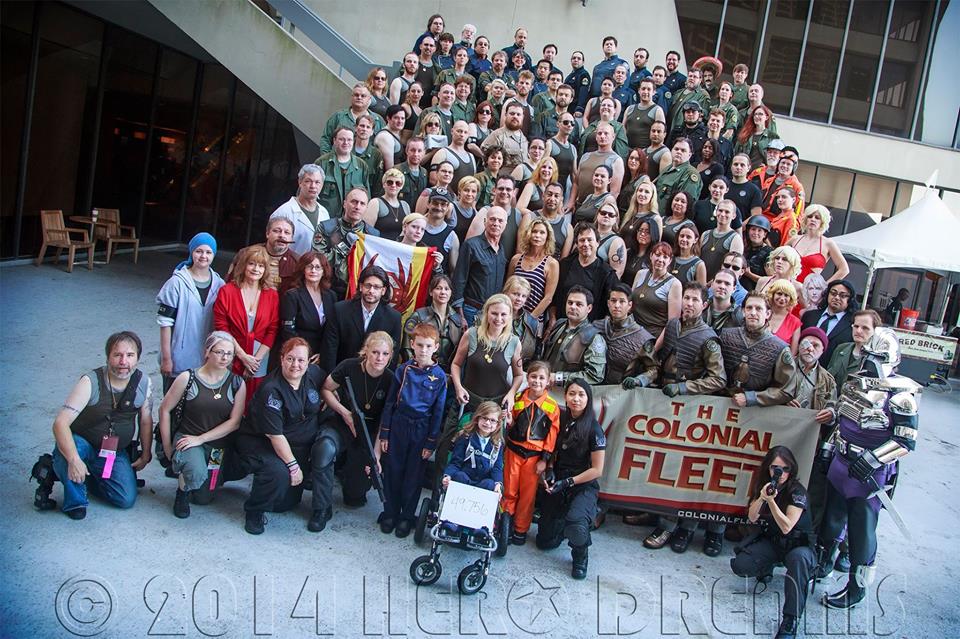 To fully illustrate why DragonCon and BSG have a special relationship, I have to talk for a minute about the disappointing show that was this year’s GalactiCon4.  Billed as THE premiere Battlestar Galactica convention, as well as Firefly, the con had a fantastic group of BSG guests lined up.  But, about three days before the Seattle event was to take place, one by one the Galactica guests were “uninvited”.  Yes, uninvited.  The ticket holders never would have known if the talent hadn’t taken to their Twitters to communicate and commiserate about the sudden and incredibly unprofessional handling of the G4 team.  DragonCon, knowing of the great fan outcry from the poorly run GalactiCon event, made the choice to bring in the many canceled Battlestar guests to this year’s DCon.  Among these were Edward James Olmos (Admiral Adama), James Callis (Gaius Baltar), Tricia Helfer (Caprica 6), Jamie Bamber (Lee “Apollo” Adama), Michael Trucco (Anders), Richard Hatch (original series’ Apollo, reimagined series’ Tom Zarek), Aaron Douglas (Chief Galen Tyrol) and making her first fan convention appearance, Grace Park (Sharon Valerii “Boomer”).  You can see the gallery from the BSG panels at DragonCon here.  Fans were ecstatic about the Battlestar swoop, and the guests presence made for an amazing experience. 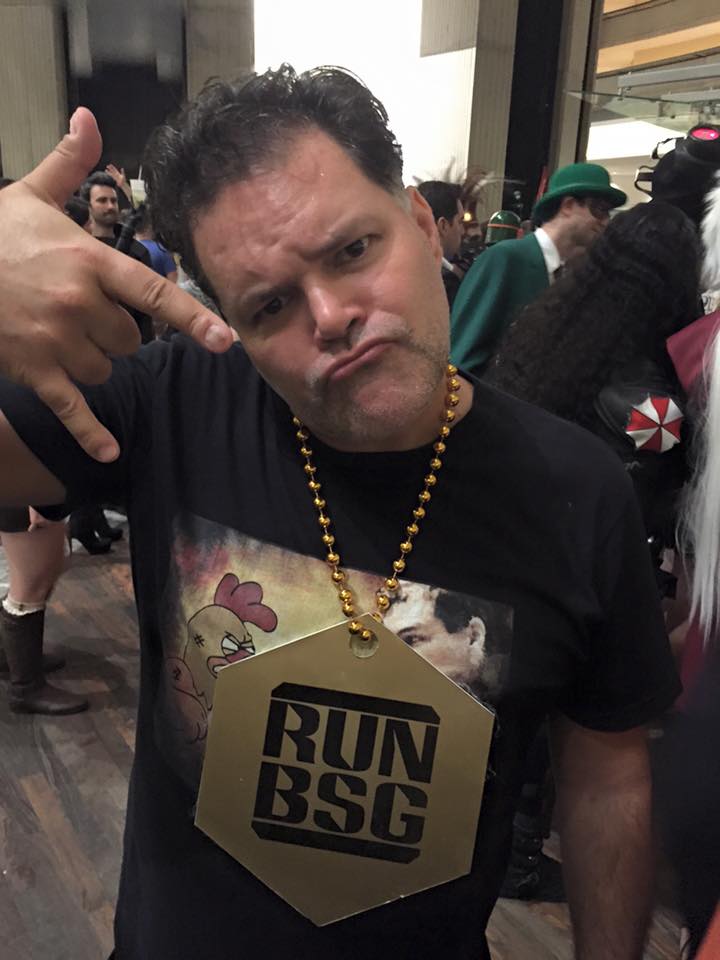 Canadian actor behind BSG character Chief Galen Tyrol, Aaron Douglas, started a pubcrawl after the unfortunate fiasco of GalactiCon4, and called the event “FindChief”.  Aaron brought some of his own personal memorabilia from the show to auction off for one of his many charities, and the outpouring of support was incredible. The DragonCon team invited him to host a second FindChief pubcrawl/auction, and the three Atlanta locations were chosen. FindChiefEp2 made a grand total of $11,000 from the raffle tickets purchased at The Brave’s Grill, Tin Lizzie’s Cantina, and Gibney’s Pub, which went to the Lymphoma Society.  You can see some of the tweets about the crawl on the Aaron Douglas fanpage here. 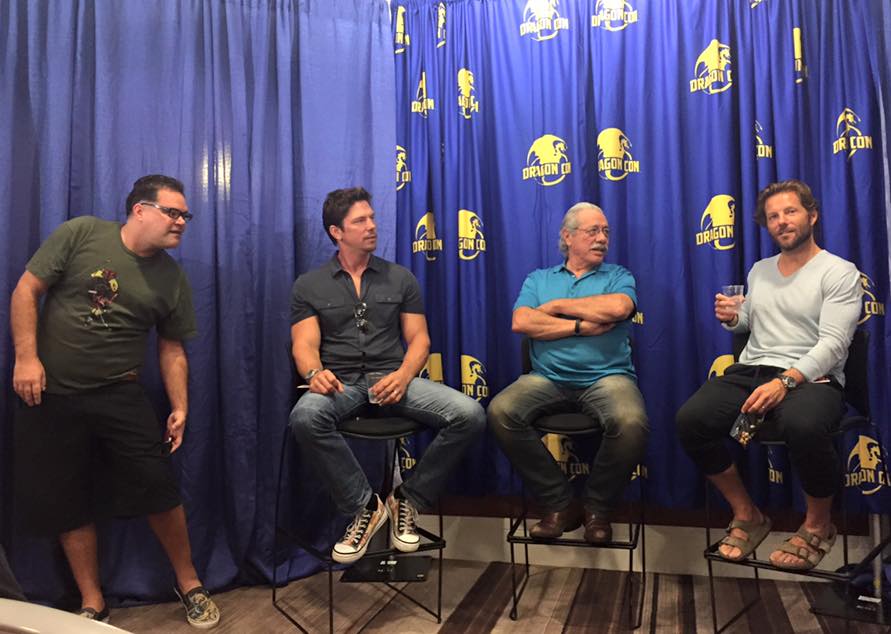 The Colonial Fleet had their own private party on Sunday night of DragonCon, and we were COMPLETELY thrilled to have the majority of the BSG con guests make an appearance. In addition to dancing and drinks, FindChiefEp2 continued to raise money, with an amazing live auction for Aaron’s chairback signed by the present cast. (It went for $1,700 to the lucky Fleet member).  No gathering of BSG fans is complete without a chant of “So Say We All”, and it doesn’t get any better than EJO leading the crowd. 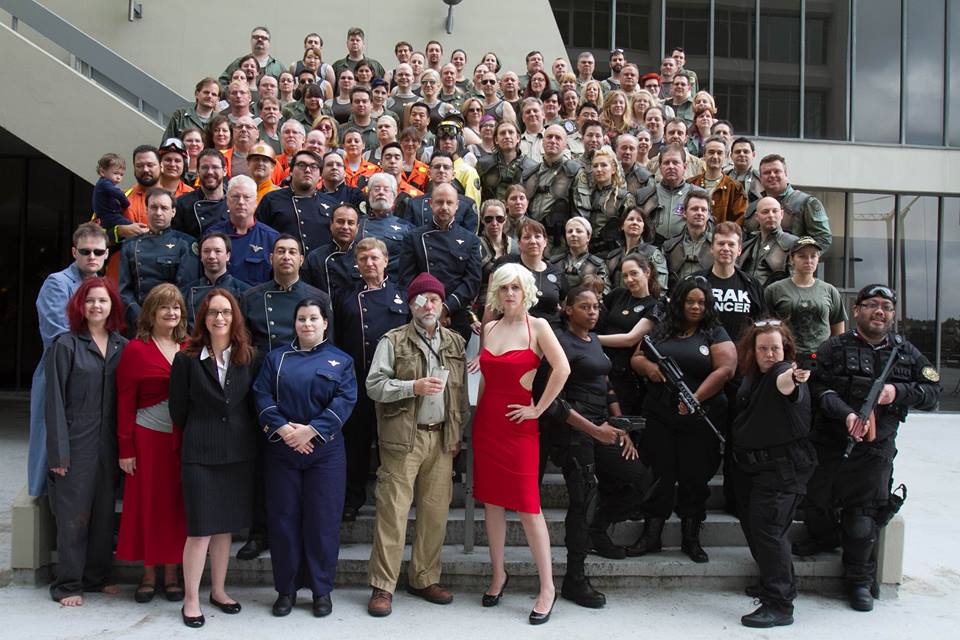 Why are these things remotely interesting and/or important?  Battlestar has known life as 5 different series across 4 (almost 5) decades, and yet the fanbase continues to grow and thrive.  The show touched it’s fans in a way that cannot be easily quantified, and continues to live on as one of the best examples of what a true human experience science fiction can be.   I cannot say enough wonderful things about the cast/crew and their understanding that something incredibly important and special happened on that set in Vancouver; Fleet *IS* family, and so is Battlestar Galactica.