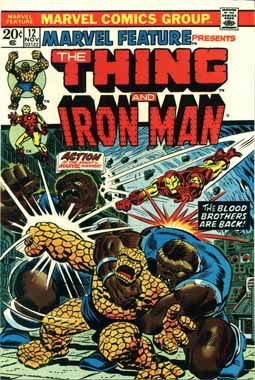 Iron Man – Tony Stark devised a powered suit of armor to stop a life-threatening injury and to escape captivity from terrorists.

On the lookout for his new enemy, Thanos, Iron Man flies across the Southwestern desert that the Thing is stranded in. He zooms past the Thing, paying him no mind, and enters the former base of Thanos – his only lead on the villain.

Inside the base, he’s ambushed by the Blood Brothers, Thanos’ enforcers. Meanwhile, the Thing is furious that Iron Man left him stranded and ventures into the base – just in time to help him fight the vampiric space monsters! Forseeing the heroes’ victory, Thanos teleports his henchmen away to some unknown fate. Meanwhile, Iron Man leaves the Thing in the desert because his armor doesn’t have the strength left to carry him home.

The battle takes place in Thanos’ former base of operations which is located in the very same Southwestern desert that the Thing was teleported to in the last issue (by Kurrgo).

WHEN do the Blood Brothers next appear? 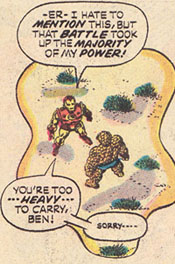 The Blood Brothers return for a rematch in Iron Man #88 (cover date: July 1976). So, it’s safe to assume that Thanos didn’t kill them for their failure in this issue.

WHY is Iron Man the guest-lead?

I think it could easily be argued that Iron Man is a guest-star in this book to lend it some credibility, since the Thing’s “team-up” book concept was still in its infancy. At this point, Iron Man was a well-established Marvel mainstay that had held his own book for years.

The inclusion of the Blood Brothers (and Thanos, for that matter) was probably due to Jim Starlin’s involvement – since he created those characters in the pages of Iron Man just nine months prior.

It’s neat to see the Iron Man/Blood Brothers/Thanos conflict heightened in this issue. Moving these cosmic villains into a book with the Thing is a more fitting concept than Iron Man’s tech-inspired world. And, he was also one of the few heroes to even know who Thanos was, at this point (see Captain Marvel #26). I really enjoyed the scenes of the Thing walking through the desert complaining and being ornery. The Starlin-illustrated battle was huge and spanned the vast majority of the book. We’re even treated to some very early appearances of Thanos (which increases the importance of this issue in regards to the rest of the Marvel Universe). 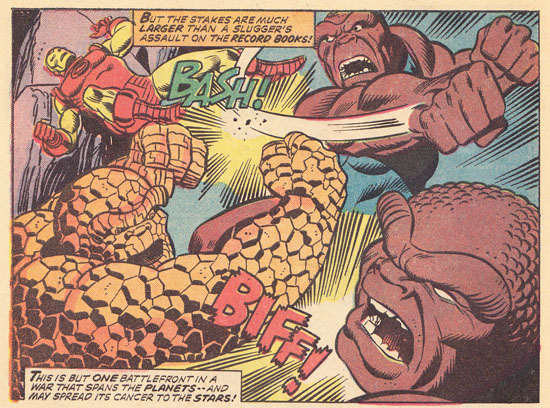 Note: This issue featured a notice that the new direction of Marvel Feature would spotlight the Thing and his adventures with other heroes. It mentions that demand for the Thing to get his own series has been brewing for over ten years. The interesting thing was that, this was actually the last issue of Marvel Feature and the tema-up concept debuted two months later with a new number one and a new title: Marvel Two-In-One! 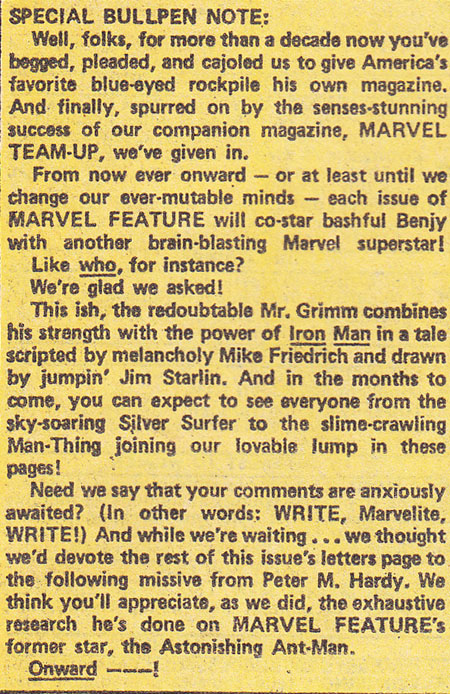