Hulk – Doctor David Bruce Banner was turned into the green-skinned Hulk by accidental exposure to gamma radiation. His already formidable strength increases with his anger.

Kurrgo, the Master of Planet X (remember him from Fantastic Four #7?), makes a wager with the Leader. Each of them selects a champion to pit against the other’s choice. The winner gets the forced service of both champions and the scientific knowledge of the loser. 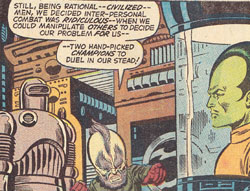 The selected champions? Why, none other than the Thing (Kurrgo’s selection) and the Hulk! Both “monsters” are teleported to a deserted ghosttown in a South-Western state, where the Thing is told that an Ultrex Bomb is primed to go off in 30 minutes, destroying the entire Earth. Unfortunately for him, the Hulk stands in his way! Fortunately for us, the Hulk stands in his way! So, we’re treated to eight Starlin-illustrated pages of Hulk vs Thing battle!

When all is said and done, the Thing finally finds the bomb only to discover that it’s a fake. After the sham is discovered, both champions are transported into a spaceship where they come face to face with Kurrgo and the Leader. However, neither the Thing nor the Hulk are interested in serving these villains so they end up destroying the vehicle’s circuitry and jumping ship – leaving the spaceship to come crashing down in the desert. Hulk bounds off into the distance and the Thing, assuming the villains died in the crash, starts walking towards the nearest town. 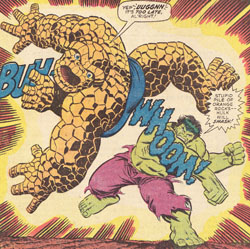 The story starts out in the Baxter Building (in New York City), where Mr. Fantastic has just finished the latest in his long line of devices intended to cure the Thing of his rocky form. Later in the book, the Thing and the Hulk are transported to a deserted ghosttown in what looks to be a Southwestern state.

WHEN do Kurrgo and the Leader next appear?

So far, it appears that Kurrgo did, indeed, die in this crash since he hasn’t made a reappearance since!

As for the Leader, he next appeared in the Incredible Hulk #223 (May 1978), where he devised a way to cure his paralysis.

WHY is the Hulk the guest-lead?

Ever since Fantastic Four #12, Hulk vs Thing battles have been one of the top highlights in Marvel stories. So, what better way to start off the Thing’s own team-up book than by featuring a fan-favorite match? 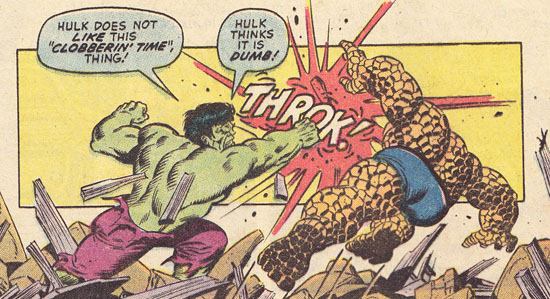 I thought it was neat that Len Wein decided to bring back Kurrgo from the depths of obscurity. This freaky alien only appeared one other time – and that was a decade prior! However, it does re-introduce a silly flaw found in many sci-fi stories: how does this alien creature speak English?!

Let’s not get hung up on that too much, though. Now, Kurrgo reveals that he wants to acquire the aid of Earth’s strongest champion to take revenge on his former people (who have since made it clear that he’s no longer welcome amongst them). OK that makes some sense, I suppose. But, the Leader‘s motivation is that he believes the champion’s strength will somehow help him escape his current paralysis. That’s a bit of a stretch – but, we’ll go with it, just for fun. 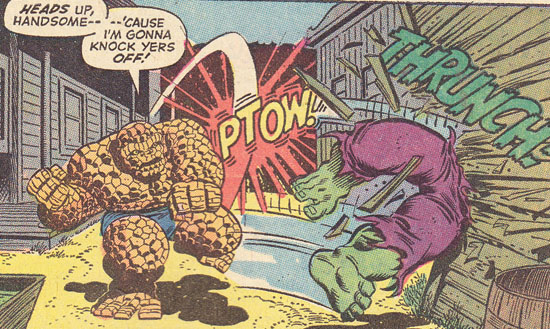 All of it is really just a way to get the Thing and the Hulk to duke it out. And, what a battle it is! These guys destroy half the ghosttown in the process! 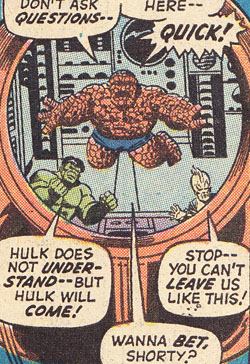 Although, it should be mentioned that it’s not quite a fair fight since Kurrgo enhanced the Thing’s strength. But, creating unfair fights is the easiest way for a writer to get around upsetting the fans. Y’see, if it was a fair fight and the Thing lost – Thing fans wouldn’t be happy. And, the same would be true for Hulk fans if he lost. But, in this case, it seems like fans of both can easily enjoy this story. And, it makes for a great first issue of the Thing’s first solo series.

Note: After the success of Marvel Team-Up (which launched in 1972), Marvel decided that they would create a second team-up style series, hoping it was a trend they could capitalize on. But, rather than take a chance right from the beginning, they opted to try out the concept. So, with the 11th issue of Marvel Feature (Ant-Man was the previous lead in this series), they allowed the Thing to begin his own series, matching him up with other Marvel Heroes. Trying out new concepts in already-established books wasn’t a new thing for Marvel. After all, Spider-Man debuted in Amazing Fantasy #15. Thor in Journey Into Mystery #83. Iron Man in Tales of Suspense #39. The list can continue with Sub-Mariner, Doctor Strange and even more heroes who got their own titles after debuting as a “try-out”! And, just like those other successful series, the Thing’s trial in Marvel Feature eventually led to his own title called Marvel Two-In-One! 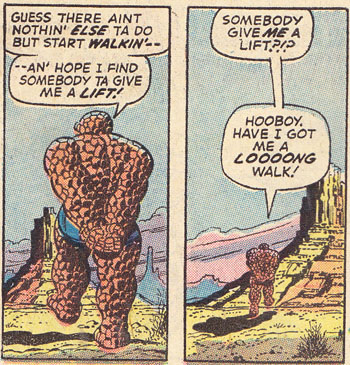 One thought on “Marvel Two-In-One prelude 1”