This is a really hard review to write spoiler free.  There are SO MANY deep cut Star Wars things in Solo: A Star Wars Story, I was shocked.  If you were a fan of the EU (Expanded Universe), you will be incredibly surprised and more than likely delighted.

When I say this will be spoiler free, I’m assuming you’ve seen the NUMEROUS trailers/videos/featureless released, or at the very least, the main cinematic trailers.  If you haven’t, here’s one:

The second standalone film in the Disney-owned galaxy far far away went through some trials to get made- it’s original directors Phil Lord and Chris Miller (LEGO Movie) were fired during production, and Ron Howard was brought in to finish the movie.  At first viewing, one can just make out things that may have been Lord & Miller moments, but Howard’s fingerprints are all over the flick.

This isn’t a bad thing, really, but something was definitely missing.  There is relatively good balance between the heist film genre and SW chapter, not an easy thing to accomplish. The action is good, the space fights and flights exactly what I needed, and Lando (Donald Glover) was a dream.

SCORE: 3.5 out of 5, viewed in standard non 3D, will see again opening weekend

However you feel about the casting of Alden Ehrenreich, don’t worry, he does NOT spend the film doing a Harrison Ford impression.  He works in the role, not perfectly, but well enough.  He gives us the optimistic exuberance of Han that we get flashes of in later years, and some formulate experiences in the smuggler’s life.  Also, obviously he has a type- the self rescuing kind of woman.

Also also, there are some pretty fabulous Indiana Jones things (both easter eggs and in-jokes) that had me laughing in a silent theater.  And- THE MOST AMAZING CHARACTER INCLUSION THAT I NEVER THOUGHT WE’D SEE.  One that could have some pretty big meaning for Star Wars: IX. 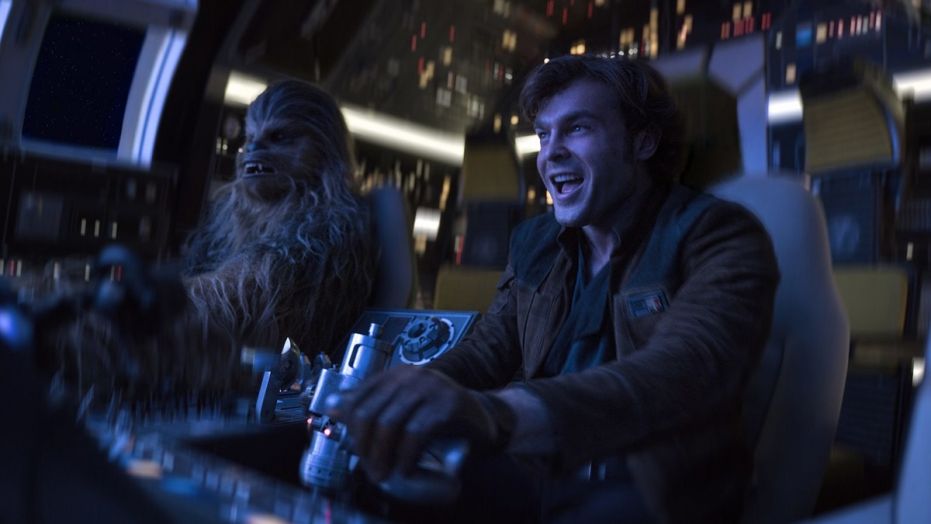 This film probably could have done well with another pass in the edit bay, it does drag at times. I want a true confirmation on the amount of reshoots and rewrites of Howard’s that made it into the film, as the rumor is something like 80%. It’s predictable to a fault- we know certain things are going to happen and who’s gonna make it out – but maybe tries to do too much with this timeline.

Once you’ve figured out the personalties of the characters around Han, things get predictable really quickly. Ki’ra (Emilia Clark) has a pretty great action scene, but then it gets really pose-y and lost all the build up (at least for me).

There is a cameo at the end of the film that still makes zero sense unless there’s a Wild Wild West tie-in (you’ll understand when you see it), that caused an argument in my elevator leaving the screening, so I’m interested to see what happens in a fan-only showing.

Honestly though, it’s fine.  The film is fine and fun enough, it hits what it needs to hit, and if you’re looking for the backstory of Solo, you’ve got it.