Fans cheered with excitement as Kansas unexpectedly took the stage Saturday morning during the Supernatural panel at San Diego Comic-Con. Righteously playing the show’s unofficial theme song, “Carry On My Wayward Son,” Kansas kicked ass as the crowd echoed with die-hard fans singing along at the top of their lungs.

The hit CW show is renewing its lucky 13th season, and that’s definitely due for celebration. During the Q&A segment of the panel with actors Jenson Ackles, Jared Padelecki, Misha Collins, Richard Speight Jr., Rob Benedict, and executive producers Bob Singer and Andrew Dabb, fans asked numerous questions about what this means for the series and what we can expect in seasons to come. The cast reminisced about their favorite memories on the show, how close they’ve become both with each other and with their own characters, and what steps they’re willing to take to make this show even bigger.

One fan conveniently asked, “what characters would you love to give a spin-off series?” As if it were scripted, Singer responded with an answer that left the crowd roaring with elated cheers. A new spin-off series called Wayward Sisters will be coming to the CW very soon.

The show takes place inside the Supernatural universe and follows the story of a few badass heroines that have played a memorable part in the story so far…plus a few new faces. The show will feature a spotlight on Sheriff Jody Mills (Kim Rhodes), a fan favorite and badass female character who truly deserves her own series, and a group of troubled young women who have all been hit by some kind of supernatural tragedy. Under Mills’ training, guidance, and protection, the group will fight against the supernatural forces and aid our favorite brothers from behind the scenes (and maybe in front of the scenes in some crossover episodes?!) 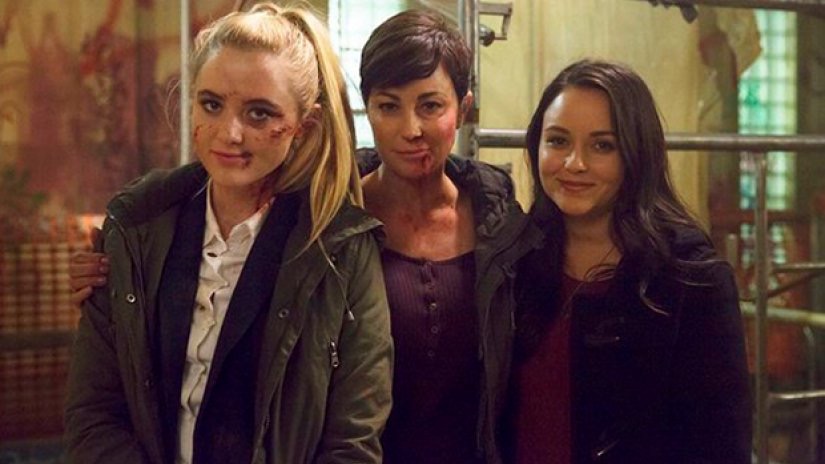 Wayward Sisters will also feature the series fan-favorite Sheriff Donna Hanscum (Briana Buckmaster), a close friend of Jody who doesn’t have too much experience with the life of a hunter but will definitely aid in some way. So far, the group of young hunters-to-be includes Claire Novak (Kathryn Newton), Alex Jones (Katherine Ramdeen), and Patience Turner (Clark Backo), a new never before seen character who is a powerful psychic and high school student. Apparently, Patience inherited her psychic gift from her estranged grandmother, Missouri Moseley (Loretta Devine) from season one of Supernatural. This little Easter egg tells us that we will hopefully be seeing a lot of old familiar faces on the show.

We can also assume that some of our favorite characters who have unfortunately passed (no spoilers, but you know who they are) may not be as dead as we thought. In the most recent season, the boys discover an alternate reality where our favorite dead characters are still walking around, and they confirmed at last Saturday’s panel that this will definitely be a recurring thing.

During the panel, fans were obviously upset about Castiel’s (Misha Collins) death in the season 12 finale, and Bob Singer responded by saying “You have to go where the story takes you. Perhaps Castiel’s time had come. Frankly, Misha had become a bit of a prima donna.”

Much to the crowd’s surprise and excitement, that’s the moment when Collins crashed the panel, walking onstage and dragging his chair behind him. Soon after, Castiel promised fans that he’s “not going away,” followed by Singer confirming that our favorite angel will definitely be back in some form or another, along with many other beloved lost characters that fans would love to see come back to life on screen.

Season 13 of Supernatural premieres Thursday, October 12th at 8 p.m. ET/PT on The CW.