Taika Waititi was an inspired choice to direct Thor: Ragnarok.  I really need to say that first before anything else. If you don’t want to know ANYTHING about the film going forward (i.e. one of those folks who hasn’t watched the trailer and sees any bit of information as a spoiler) you may not want to read any further.  Instead, you can go read “Planet Hulk” and Walt Simonson’s “Thor” run.

There is always that “Marvel has humor, DC has dark and broody” argument that comes up anytime we get a new film from either house, ultimately they are compared to each other unjustly.  They’re completely different.

If that trailer from SDCC made you super excited with it’s technicolor space chaos, then good news! You’ll more than likely enjoy this film.  If, like me, you were absolutely ecstatic with the choice to feature Led Zeppelin’s “Immigrant Song”, then you’ll be super happy with it’s inclusion within the film.

Thor: Ragnarok is the third Chris Hemsworth Thor-centric film in the Marvel Cinematic Universe, and of course Tom Hiddleston as Loki returning is an intrical part of the aforementioned chaos. As we’ve seen from the trailers, we get Oscar winner Cate Blanchett as Hela (Hell-a) Asgardian goddess of Death, Tessa Thompson as Valkyrie, Karl Urban as Skurge, the return of Mark Ruffalo as The Hulk, and the true gem of Ragnarok,  Jeff Goldblum as The Grandmaster. 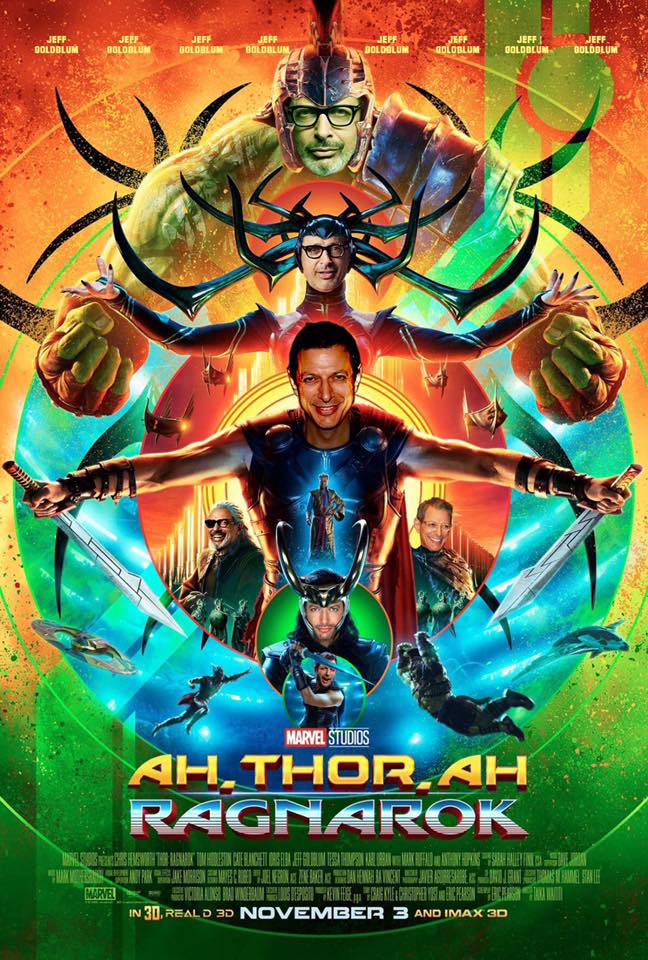 Just from that lineup, you get a pretty good idea that some crazyness is going on give or take a few surprises along the way.  The biggest change to the main arc of the mentioned characters above is actually Thor’s relationship to Hela.  I won’t spoil it here, but I know several other outlets already have.

Originally, Waititi’s pitch for the film was ” a cross between Flash Gordon and Big Trouble in Little China, a lovable hero bumbling through a crazy world, meeting crazy characters”, and boy howdy he delivered that.  The color palette alone is reminiscent of so much Jack Kirby classic space scenes, the hommage is certainly evident.

This is probably the best character presentation of Thor, because he isn’t such a stuck up jerk.  Sure, his arcs are always the hero’s journey with a monumental “come to Odin” moment, but this one is different.  He’s likeable from the get-go, and maybe that’s because we’ve known him for so many films now, but his tone and personality are monumentally different in Ragnarok.

The humor, while not on par with lets say Iron Man or even Guardians of the Galaxy 2, is pretty enjoyable.  These are adult characters, who react to many of their situations like adults would, with curse words and bad puns and tasers.

The music also, tremendously important (as it always is) to the tone and general feel of the world(s).  The trippy 80’s synth influence with a modern industrial goth edge makes for some pretty great cues to accompany such a lush visual landscape.

Oh man, where to start.  Without complete and utterly spoiling things, the CGI is a mess.  More specifically, any time we see Hela in motion or doing ANYTHING other than standing, such as the fight sequences, she looks like a really bad video game.

Remember a million years ago when a CGI Harry Potter fights the dungeon troll?  It looks like THAT.  I was really looking forward to seeing her fight, really FIGHT with Thor, but there is maybe one shot where it’s actually her trading sword blows, and even that is from the waist up.

The plot and pacing, while fine, seem forced at times.  Just getting from point a to point b seems to be a struggle, and maybe that’s part of the charm this time around.

In general, Thor: Ragnarok was not a disappointment, and I did enjoy it as a fan. Does it reinvigorate the superhero tale?  Not especially, but if this is the new galaxtic direction we’re going in, I’m certainly along for the ride.