After many years of anticipation, Chairman of Walt Disney Parks & Resorts Bob Chapek announced Toy Story Land will be open to the public summer 2018 at the D23 Expo this past weekend.

First announced at the 2015 expo, no real news or updates about the park’s rides were released since.

Similar to the Toy Story Land which opened in Hong Kong in 2011, this area will give guests the sensation of shrinking down to toy size and exploring Andy’s bedroom. It includes two new rides. First is Slinky Dog Dash, a family friendly coaster where riders zoom along the course that Andy himself made to test Slinky’s stretchy abilities. 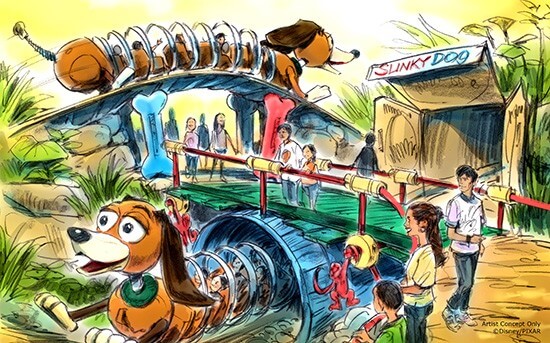 Second is Alien Swirling Saucers, designed to look like a toy set Andy got from Pizza Planet (also no announcements yet of Pizza Planet to be included in this park). Aliens are flying all around in their saucers as they try to abduct you in your rocket with “the claw”.

Toy Story Land will be opening in the Hollywood Studios section of Walt Disney World.