You’ve likely heard the concept before: when an alien menace rises, a group of scrappy teenagers led by an enigmatic pseudo-machine garner special powers and strike back against the threat, utilizing a healthy batch of martial arts and their own unique skillsets—the smart guy, the leader, the strong jock, etc.—along with a giant robot for those particularly explosive finishes.

Chroma Squad—a tactical RPG by Brazil-based Behold Studios—injects a healthy dose of meta to the equation. The result is a cheery, fun-filled romp that skips the inherent complexities and opts for a more accessible experience with a lighter look to reel the fans in. 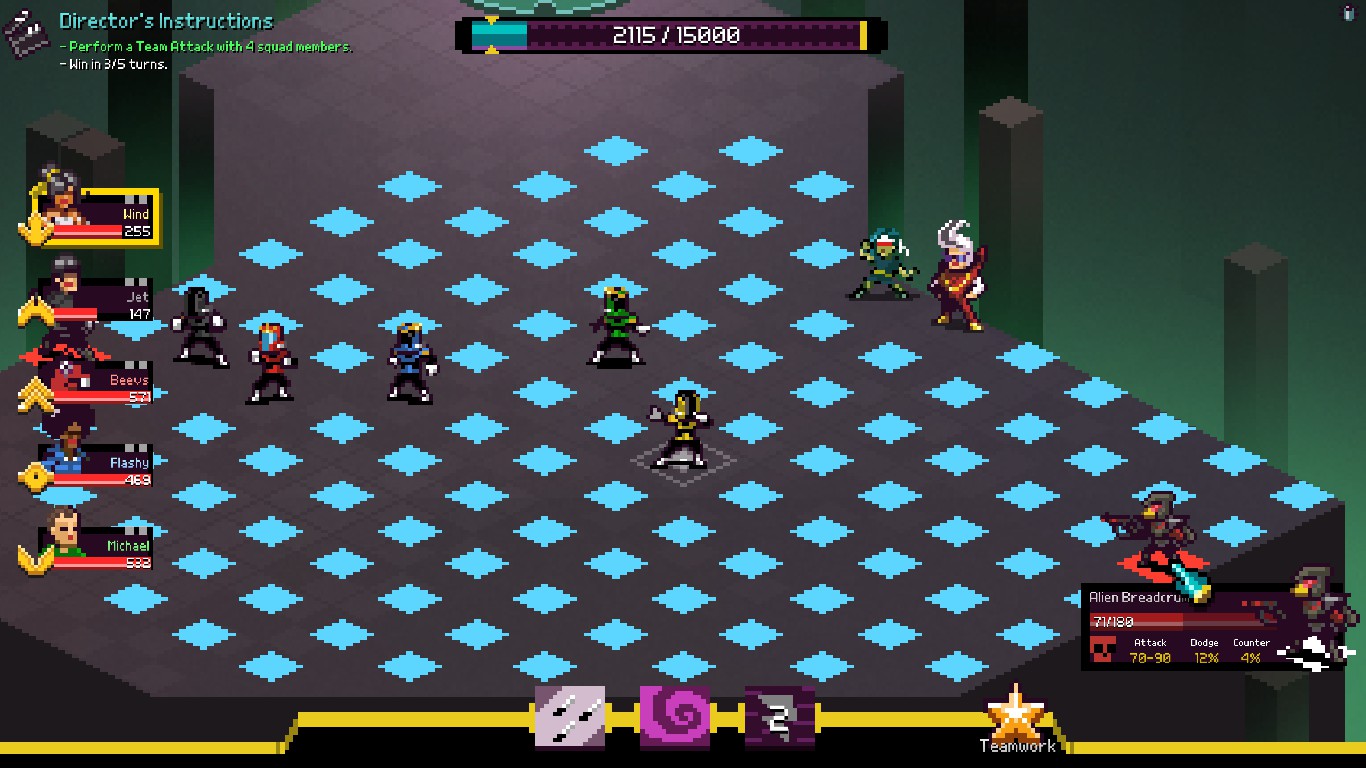 The game opens as many others: with a tutorial. During this scene, however, it becomes immediately apparent how well the theme of the game marries its setting, mechanics, and narrative.

It’s not a Power Rangers ripoff—it’s a Sentai simulator. Sentai being a Japanese word loosely translating to “task force”, and is pretty much a genre of TV shows all their own—in which a small team goes up against insurmountable odds using specialized skills, often accompanied by a giant robot. Rather than just utilize that concept, Chroma Squad jumps up a level—it’s a game about a group of stuntmen recording a Sentai show under a dictatorial director (who nitpicks the expert stuntmen while simultaneously teaching you how to play).

At the end of the tutorial, the team becomes fed up, leaving to form their own indie studio (in another delightfully meta move, being an independently produced game), using a warehouse owned by the uncle of a team member. The warehouse also happens to contain a replica of an old ’90s action TV show, obviously reminiscent of Zordon, and the filming commences.

The rest of the game is set up as five seasons—each containing a few more episodes than the last. What starts as a group of hopeful individuals grabbing footage and building an audience gives way to a powerhouse studio with high-grade equipment, an in-house crew, and even marketing contracts, all of which contribute in some way to your team’s ability to to continue “fighting”—either with money, morale-boosting fan power, or fancier equipment.

The story goes even further, but I don’t want to spoil it, it’s really a very clever journey overall. Individual moments are generally filled with hokey dialogue that’s good for a chuckle here and there, but the overall message is presented with such consistency you can’t help but be swept up in it at times. The game constantly winks at the TV shows that “inspired” it, heroes are kidnapped, guest stars appear, and monsters do what monsters do best: get beat up, get bigger, and get beat up again. In a way, the episodic nature of the game emulates the structure of the Sentai show, another way the games lives up to its “Sentai Simulator” moniker. 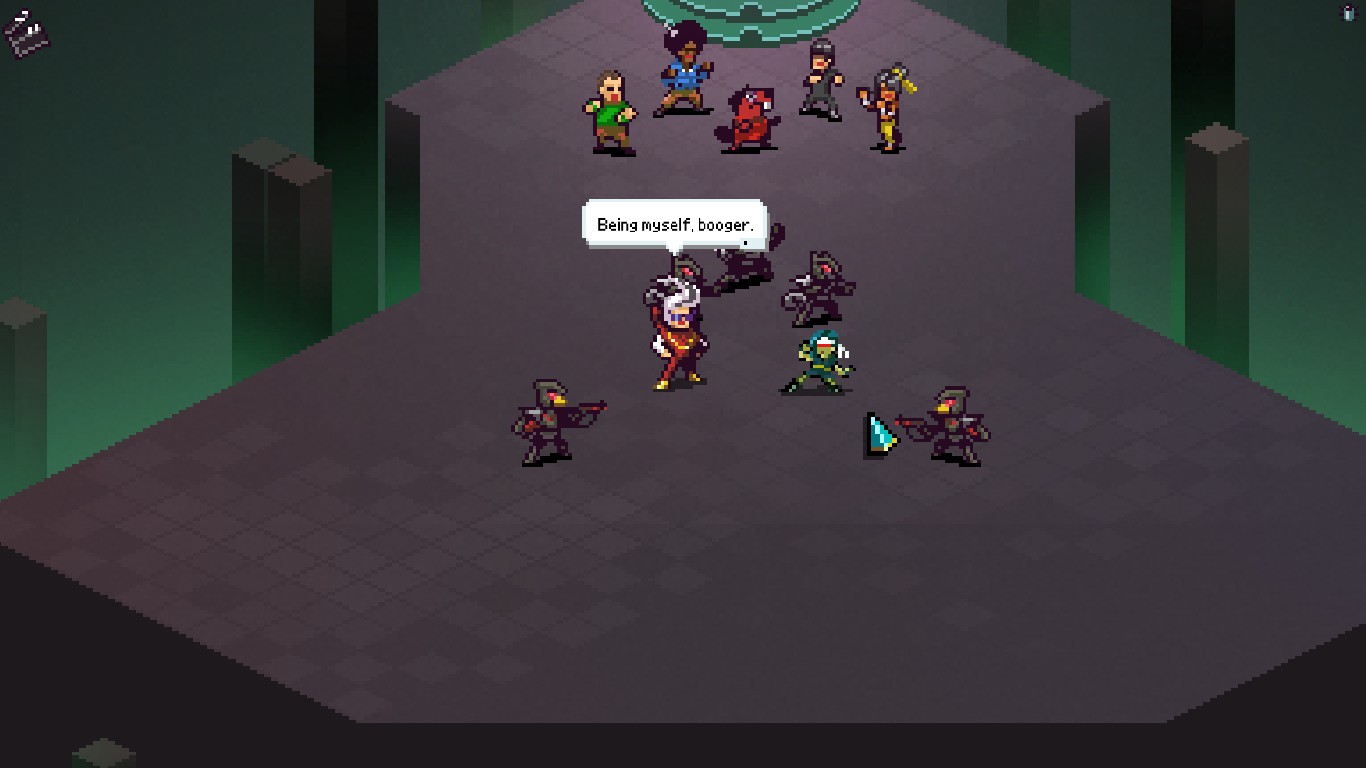 While clever, it doesn’t hold a lot of narrative gravitas. It’s no Journey or Shadow of the Colossus. There’s no pathos to be had here, just some casual fun to be had that lends itself very well to smaller bursts of play—good for the busy gamer who has a full schedule most days.

From a gameplay perspective, the game is a simpler, more accessible version of, say, XCOM: Enemy Unknown. At the beginning of the game, you make up your squad by choosing a character to fit in each of the five roles on the team. A character’s role determines what equipment they can use as well as their skills. Each of those roles can be filled by one of a wide variety of quirky characters capable of bringing their own small tweaks to the table: an extended movement range or a higher critical hit rate, for instance.

The Leader role has a health boost, can use spears for strong melee damage at extended range, with skills that either focus on grabbing additional audience or controlling the field. The scout can move faster than other members, uses daggers for quick hit-and-runs, and uses skills to stun or strike enemies quickly. The assault can dish out heavy damage (but is often a glass cannon of sorts), uses axes for heavy hits, and features high-grade damage skills. The techie focuses on firearms and fast cooldowns on his very utilitarian skillset—AoE damage and strong ranged attacks, to name a few. The Support class can use bows and enhance or heal others.

The key difference between this and many other strategy games like it is that your five-man squad is all you get throughout the game; you’re unable to change the characters in each role, and aside from equipment, and selecting from a limited skill pool, there’s not a lot of customization to be had in that regard. You won’t be creating massive armies to tackle different situations—your squad is the same five people (with the occasional guest or omission) often fighting for the same (or similar) objectives.

Stages take place on a grid during the filming of an episode. A character can move up to their move stat in spaces and take an additional action: a basic attack, use a skill or a weapon, or enter a Teamwork stance. Teamwork lets a character either combine their attack with other characters adjacent to the target or vault characters moving past them to reach greater distances. Attacking an enemy with all five characters at once triggers a finishing move, that—when used as the final attack in a stage—often comes with a healthy audience boost, as well. It’s a handy and useful mechanic that fits into the meta, but feels largely underutilized. 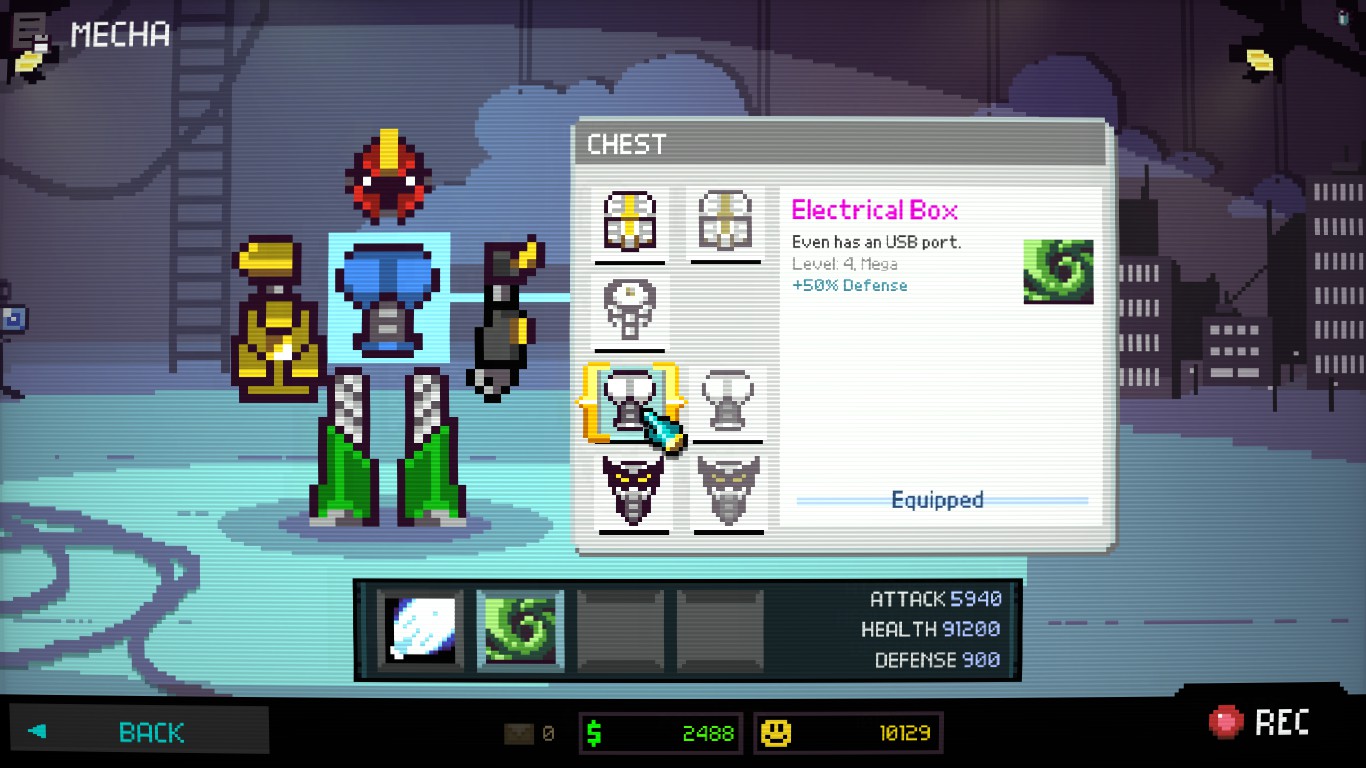 Many stages are also followed by a Mecha fight, as the boss grows to a large size. In a simple turn-based fighting game-esque moment, you string together basic attacks that increase in strength as their chance to hit drops. During your enemy’s turn, you play a small timing game to diminish the damage as much as possible. It’s a fun and explosive conclusion to most stages, and you can tweak the components that make up your Mecha to alter its stats and perhaps grant special skills that might boost defense or heal based on the combo counter, or dish out heavy damage in a finishing strike.

In a way, the game takes a page out of Fire Emblem‘s book. Where other games in the genre often rely more heavily on numbers and on constantly evolving your squad makeup to address the different situations you find yourself in, Chroma Squad strips out all but six stats or so stats per character, and limits enemy variety to a few basic units (basic melee, basic ranged, healers, and defensive units), and only really adds variety to bosses and the occasional special enemy.

There’s little in the way of unpredictability here. Stages often play out the same way: kill some minions, then hit the boss. Director instructions are optional objectives that boost your audience gain in each episode (which are converted on an episode’s success into money and fans), and offer the most diversity by requiring players to, say, eliminate a particular number of enemies on an infinitely spawning stage or throw caution to the wind and attempt victory within a short number of turns.

Also unlike other games, your characters don’t gain any form of experience. Skills unlock for each character at a set rate as you progress through the story, and there’s no way to grind up if a level proves too difficult (which shouldn’t be a problem, the game’s not too tough). Like Monster Hunter, your characters start off wearing homemade costumes comprised of cheap gloves, hiking boots, cardboard helmets, and whipstitched body suits. As you beat enemies, they’ve a chance to drop various materials which you can fashion into better digs which provide different bonuses, and you’ll invest money in better equipment in your studio for global benefits of various kinds.

Once you reach a particular point, marketing companies will take notice of your show and offer their services. Different marketing companies provide different benefits at varying costs, some might enhance audience gain or income, others might pump up your actors’ attack stats during combat. The fans you’ve accrued over time also allow for more powerful enhancements from your marketing group. 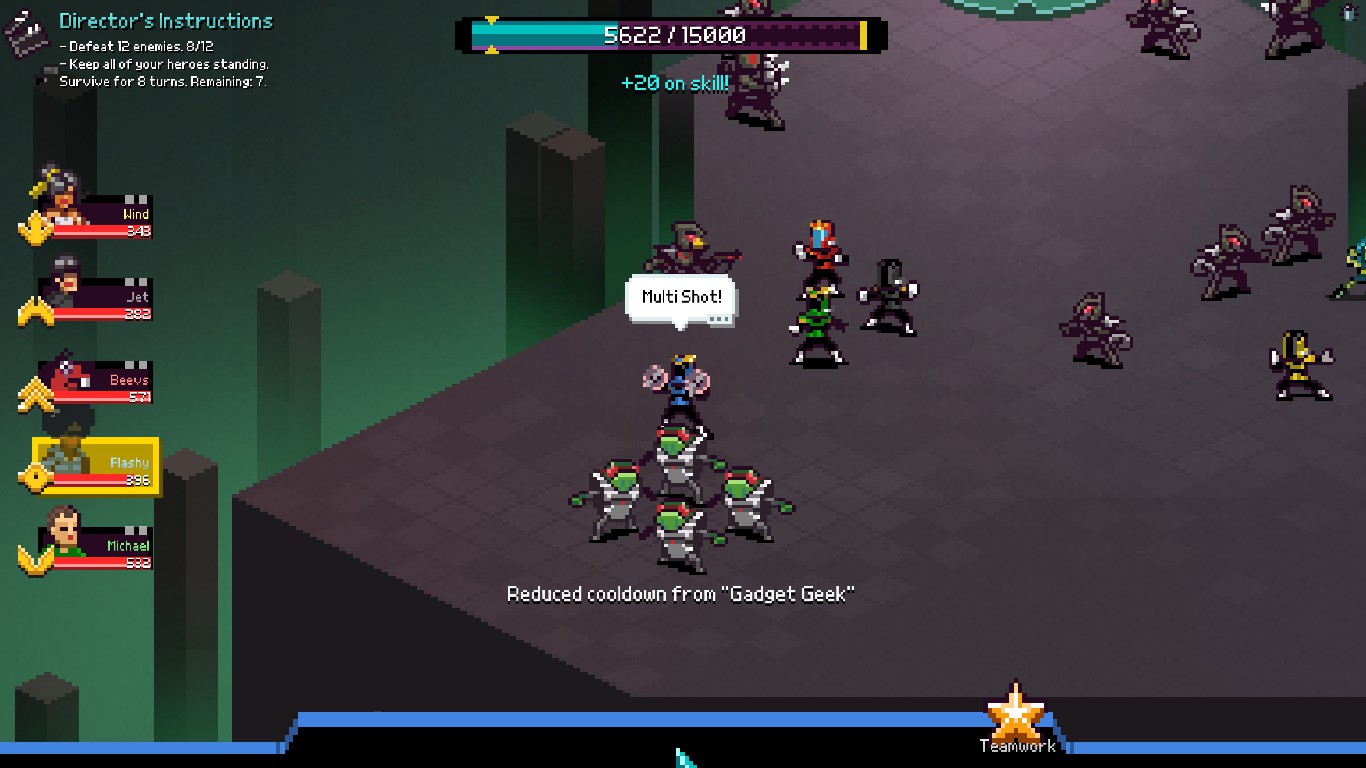 The game relies on a retro-pixel art style, something I’ve often admonished in the past as a cheap gimmick or a way to avoid spending extra money on animation or complex art. Chroma Squad‘s art isn’t particularly notable, using simple loops for idle animations, and not a whole lot else of note. What does work in the art is the kitsch factor: like the old TV shows, your characters often (always) strike silly poses as they speak, your finishing move is sufficiently colorful and filled with unnecessary lighting effects and the like. It all fits with the off-kilter dialogue, one-liner jokes, and occasionally ridiculous characters that you can play as (my lead character is a sentient beaver, for example), but the art otherwise doesn’t engage. At best, it’s cool that all gear is visually represented on your character, so your look does change throughout the game somewhat.

In fact, that’s one of the larger issues in the game: it has no staying power. The first four hours of gameplay were spent with me eagerly upgrading my employee health plan (extra HP during fights), painting cardboard boxes with acrylic paint to build a better Mecha, and beating up mooks in squirrel suits while grinning about a funny line of dialogue.

By hour nine, the levels felt repetitive, the novelty of new pieces of cleverly-named gear had worn off, and the game—while solid—just wasn’t unique or meaty enough to really propel me forward. I don’t dislike my time in it, but it gives way easily to more intriguing or unique experiences. It’s not a matter of art or theme, per se, the game just sort of feels…plain outside of that.

The saving grace in that regard is the $14.99 price point on Steam. It’s not a game that demands a lot of its players, as its contemporaries might. You don’t need to feel like you’re committing excess amounts of time to play, you can jump in and do an episode in twenty minutes, if that’s your preference. If you want to play a game that’s at once a cheeky behind-the-scenes look at, and an emulation of those TV shows you did so love to watch when you were a pre-teen in the ’90s, then Chroma Squad may just be for you.