It’s always good when a film we’ve looked forward to is worth the wait, and Colossal certainly is. This is a completely different kind of monster movie, one that seeks to confront the root of uncontrollable destruction that dwells inside some of us.  Spanish writer/director Nacho Vigalondo completely delivers with this film. I’ll do my best not to spoil anything that wasn’t already revealed in the trailers, ok?

Gloria (Anne Hathaway) is out of work, dealing with the WORST kind of hangover, and gets kicked out of her apartment by her boyfriend.  She’s forced to leave her life in New York and move back to her tiny crappy hometown. Somehow, in the aftermath of a pity party bender, she wakes up to news reports that a giant creature is destroying Seoul, South Korea. Gloria gradually comes to the realization that she is somehow connected to his far-off phenomenon. As events begin to spin out of control, Gloria must determine why her seemingly insignificant existence has such a colossal effect on the fate of the world:

Sounds pretty crazy right?  Not as far fetched as you’d think though, the entire film is presented in a no nonsense realistic tone that took me by surprise.  There are such truthful moments mixed in with the Kaiju appearances, pretty sure everyone who sees Colossal will recognize shades of friends in the chaos of alcoholism and abuse.

Don’t let those two words turn you off though, there *is* humor, dark and twisted as it is. The performances of Oscar winner Hathaway (Gloria) alongside comedic powerhouse Jason Sudeikis (Oscar) alone should get butts the seats, but you’ll certainly stay for the twists.  Because yes, there are some pretty great twists you won’t see coming. 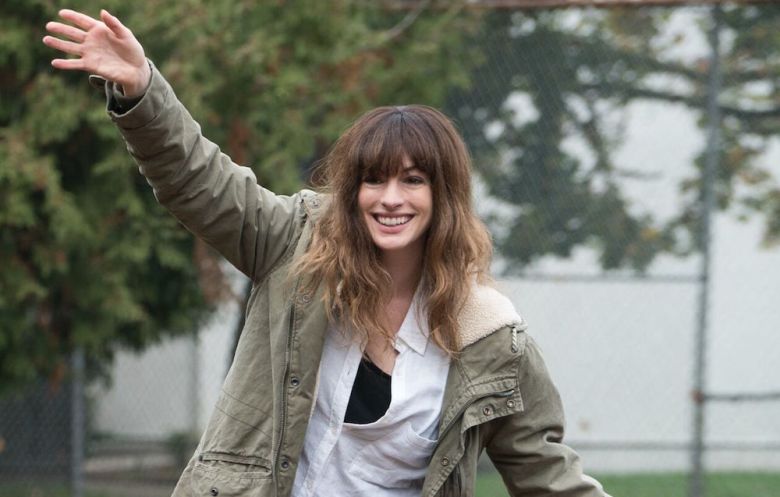 “I think an important part of this film is that you can go and just enjoy it as a film,” Hathaway said. “If you want to think, you can think, but it’s not going to make you sad. It’s not a depressing movie, it’s hard at times, but it’s not depressing. It makes you feel good in a lot of ways, unless you just don’t know how to feel good.”

The film’s twists apparently even surprised it’s cast, Jason Sudeikis explained that Vigalondo’s script was the right thing at the right time, after romcoms and SNL. “It was a fun, familiar 30 pages that then got more and more interesting as we went. The surprise was, ‘Oh that’s where he’s going with this guy.’ I thought that was just fucking delightful.”

The good: Refreshing take on usual tropes of “broken” main characters attempting to solve problems throughout the story.  It’s not REALLY a love story, it’s not about Gloria being rescued by someone else, and she gives just as good as she gets in terms of blows.

Emmy winner Bear McCreary‘s score needs to be mentioned too.  While yes, it captures the indie-drama feel, it also pulls in the full orchestral sound a big monster film deserves.  Emotional punches and layers of complexity are sort of McCreary’s hallmark now, and his aural tone serves the movie well.

The bad: Not too much bad to be had, really. Someone will of course complain in the process of review about Gloria being ‘abused’, which she is.  So, sure.  Abuse- bad. But other than that, no complaints from us.