Avengers Campus will officially open at Disneyland’s California Adventure in Anaheim on July 18th, 2020! Here’s an updated look at what guests can expect to see at the brand-new Marvel Studios-themed area adjacent to Carsland. 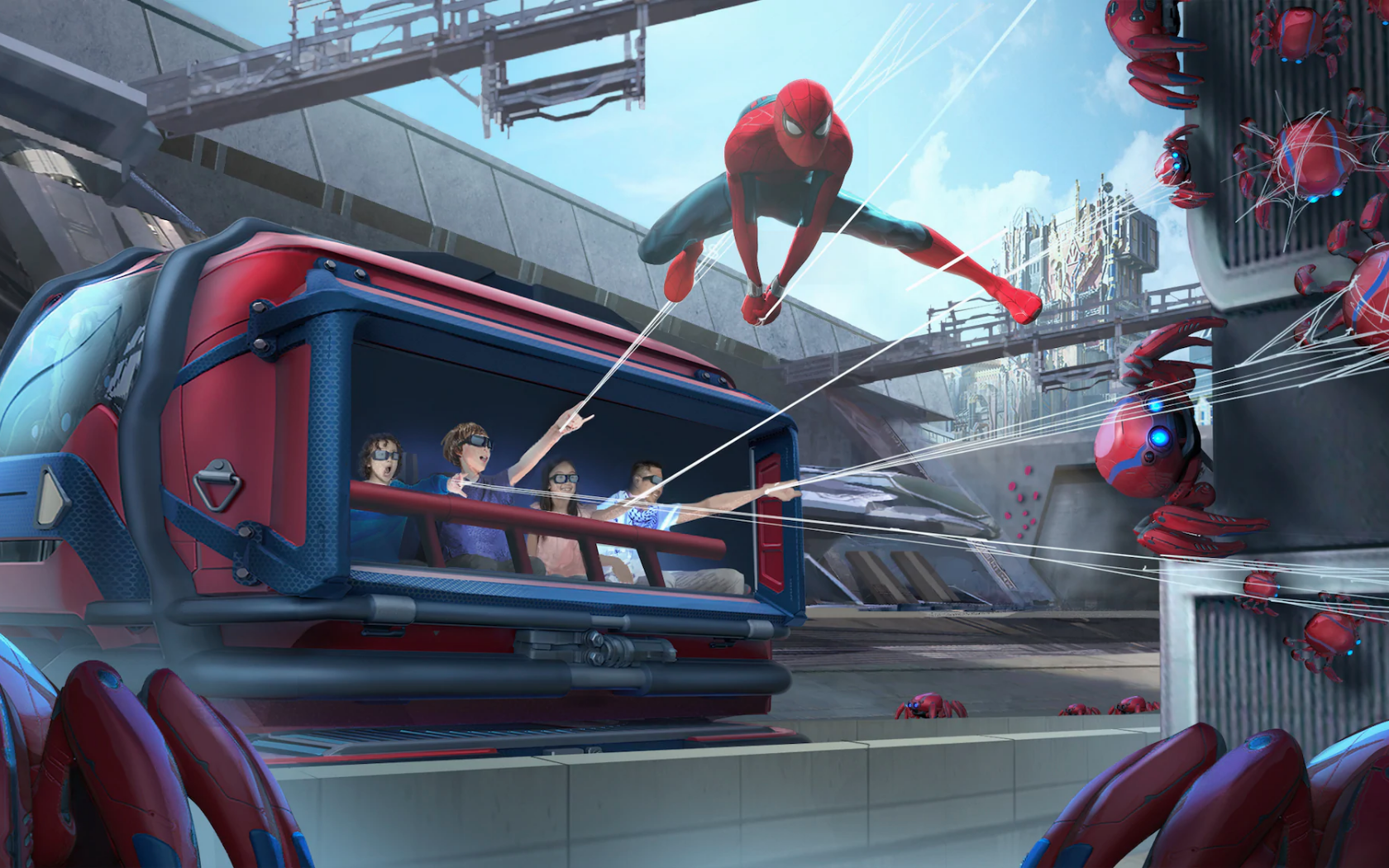 Wrangle rogue Spider-Bots run amok during this mayhem-filled mission—opening July 18, 2020 at Avengers Campus! Also, as it was announced today, Tom Holland will be reprising his role of Peter Parker, aka Spider-Man for the attraction.

Embark on an action-packed adventure alongside the amazing Spider-Man! When Peter Parker’s helpful but otherwise buggy Spider-Bots get stuck in replication mode and escape from a WEB Workshop, Spider-Man must stop the rampaging robots before they wreak total techno-havoc across Avengers Campus. Problem is, they’re rapidly leveling up and becoming tough to beat!

Your task? Hop aboard a WEB Slinger vehicle and help weave a frenzied web to trap these arachni-rascals in true Spidey style. It’s up to you to unleash your inner hero and save the Campus from complete chaos!

Perfect for recruits of all ages—with no height restrictions. 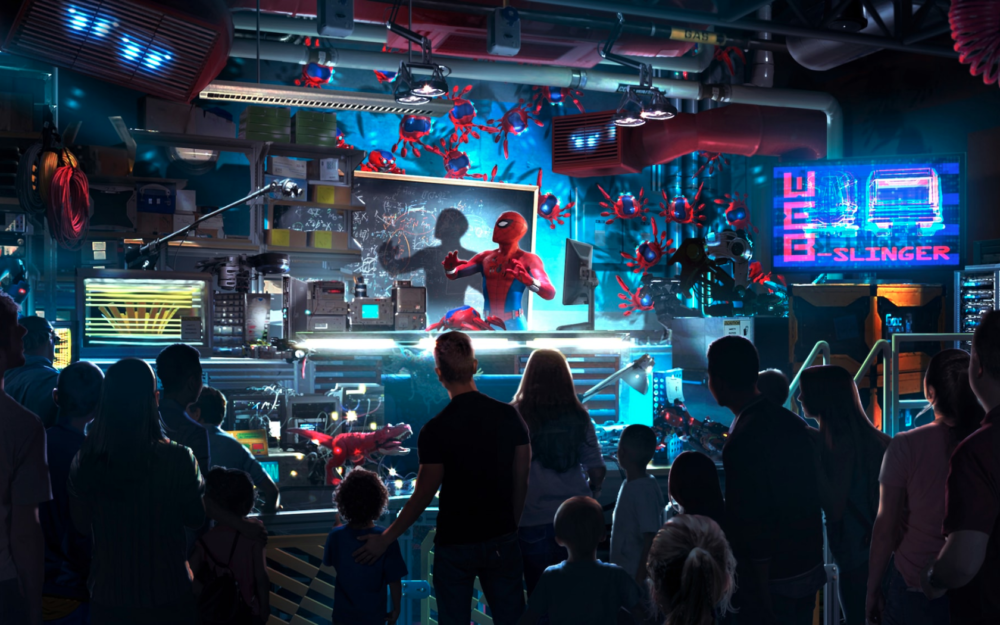 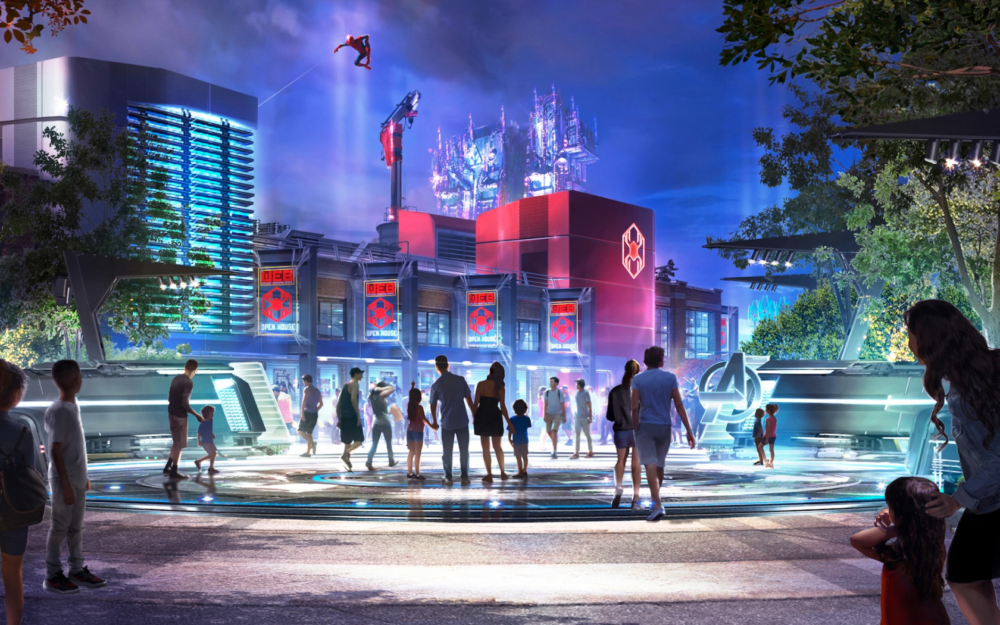 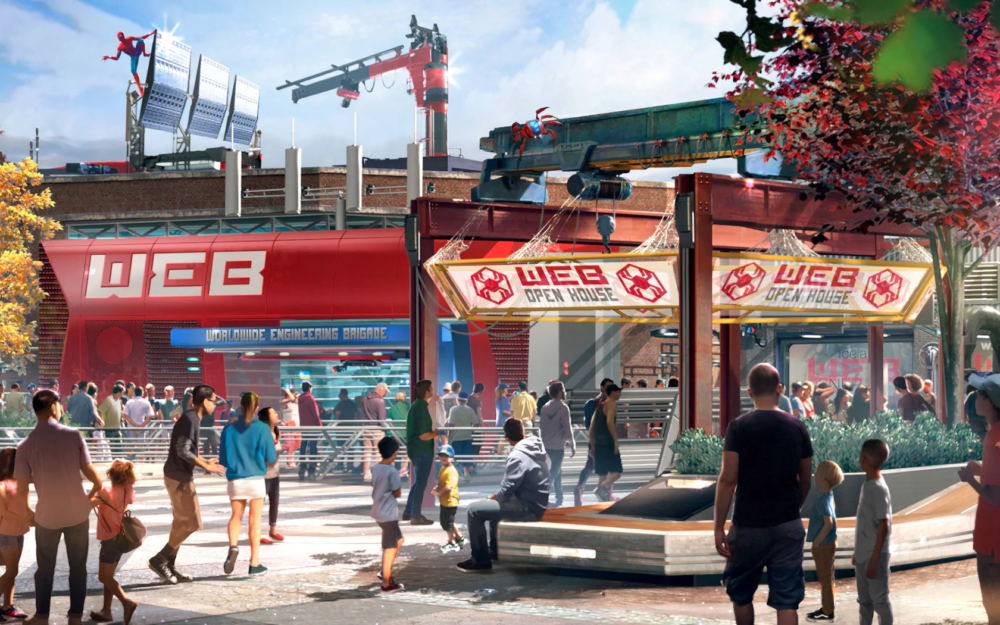 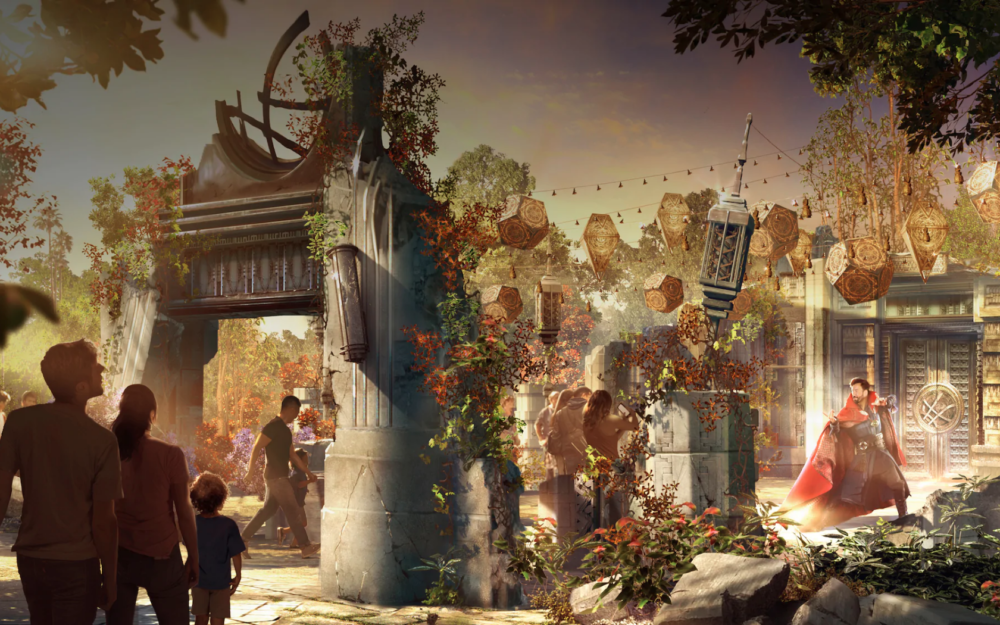 Explore the ruins of a mysterious ancient sanctum and learn the site’s secrets from Doctor Strange.

For as long as anyone can remember, rumors of unexplained events and energies have emanated from a remote location in the hills outside Los Angeles.

In the late 1940s, a Stark Industries complex was built on the location. Decades later, Tony Stark invited Doctor Strange to the Avengers Campus to enlighten recruits about the mystic arts. Doctor Strange suspended the area’s cloaking spells and revealed the Sanctum to the world.

Come, discover for yourself what has been hidden for centuries. See the ancient ruins and learn from Doctor Strange about the long-ago battle that threatened to tear a hole in the fabric of time and reality, which resulted in the creation of the amazing Orb of Cagliostro.

The Orb is known to be especially active at night. Visit after dark and you might see the Sanctum flowing with magical energy!

You and your fellow recruits have been invited to visit the Avengers Campus, meet Doctor Strange and open your eyes to the mysteries of the multiverse. Don’t miss this once-in-infinite-lifetimes chance to learn the secrets of the mystic arts.

You’ll feel like time will stop when you come face to face with Doctor Strange and he demonstrates his mystical abilities. Who knows, someday you may need this knowledge to defend the earth, and our reality, from threats beyond your imagination!

Encounter some of Earth’s Mightiest Heroes and watch them spring into action to defend the Avengers command center!

The gleaming Quinjet that rests high atop the Avengers Headquarters building is bound to attract attention—maybe even some unwanted attention.

There are reports that the villain known as Taskmaster is plotting a break-in, and the Avengers are on high alert. Brave Super Heroes like Black Widow, Iron Man, Captain America and Captain Marvel greet new recruits and scan the horizon for potential threats.

If Taskmaster and his gang of mercenaries do appear, our heroes are ready to defend the Avengers Headquarters, which would surely lead to an action-packed confrontation on the rooftop and all over the building. You’ll definitely want to be there to see what happens.

Who knows, new recruit, maybe someday you will join the Avengers on their next adventure! 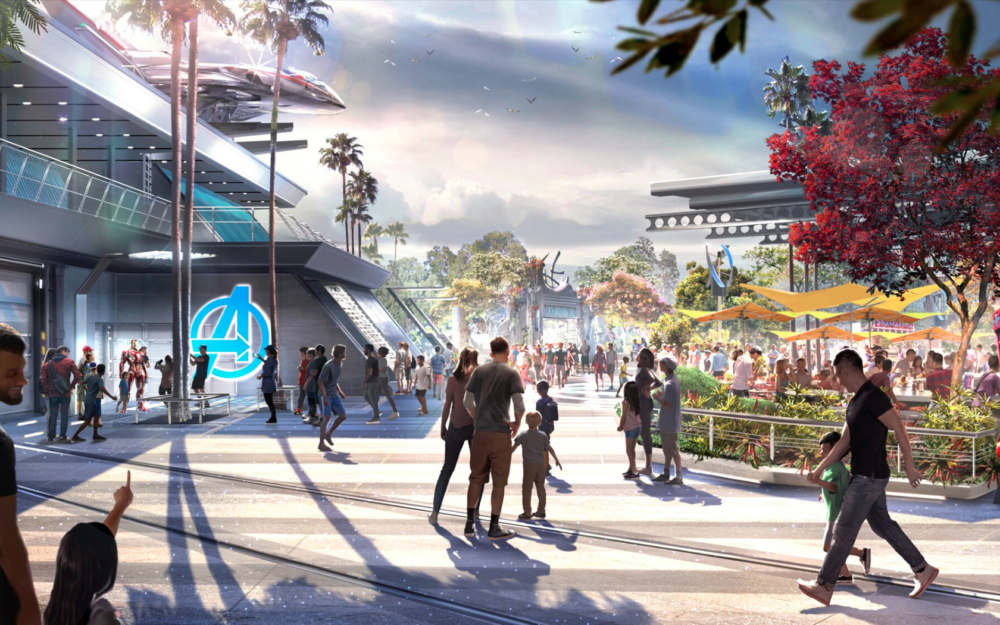 Refuel with Ant-Man and The Wasp’s size-defying fare at this epic eatery!

On an urgent mission to fight hunger? Head to Pym Test Kitchen for phenomenal food at unusual scales! Utilizing the revolutionary shrink-and-grow technology of Pym Particles, Ant-Man and The Wasp lead a team of research chefs as they pioneer a menu packed with massive meals, tiny treats and shareable bites that save the day.

This old lab facility-turned-quick-service restaurant features a seating area and bar amidst décor that incorporates remnants of ongoing experiments—gigantic soda cans, humungous condiment bottles and massive cellphones recycled into menu boards. Stop by to taste-test their latest innovations in food science and conquer uncontrollable appetites on the spot! 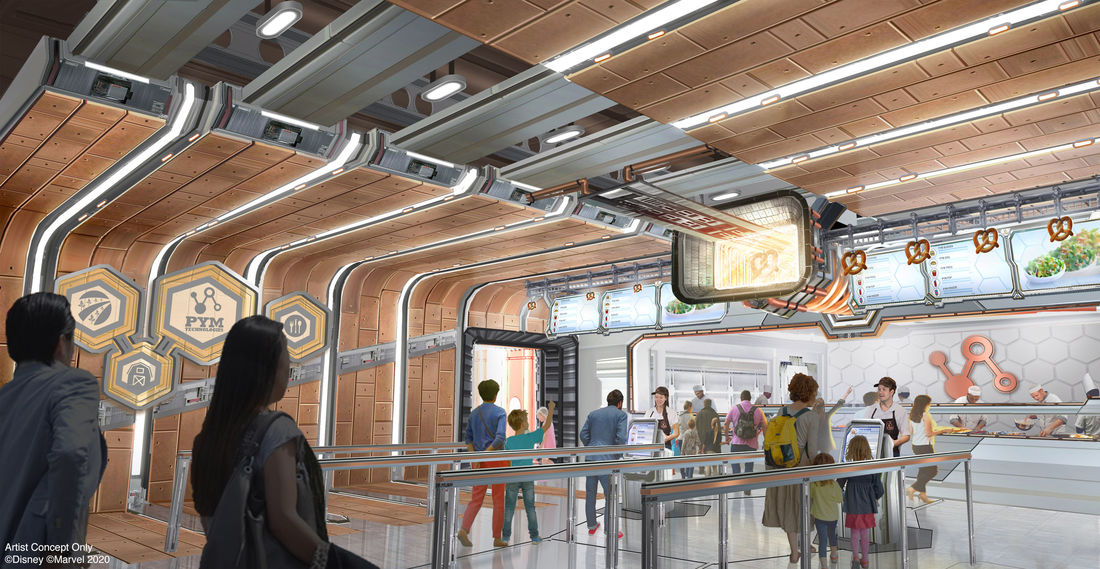 What would Avengers Campus be without shawarma? New York City’s Shawarma Palace is an Avengers favorite (and has been since they first tried the local joint following the Battle of New York). By special request of Earth’s Mightiest Heroes, the Shawarma Palace crew is opening up a location within Avengers Campus that will serve a fragrant chicken shawarma and garlic sauce, as well as an Impossible™ plant-based falafel version. Look for the cart that’s decked out with Avengers memorabilia.

If you’ve already been fascinated by the unique collection Taneleer Tivan has curated in his fortress and on display at Guardians of the Galaxy – Mission: BREAKOUT!, prepare to be tempted by his equally enchanting assortment of intergalactic eats and treats at this food cart. The Cosmic Cream Orb resembles an Infinity Stone, but it has the flavor of a delectable cream puff filled with raspberry cheesecake mousse. Terran Treats will also feature a changing variety of colorful Sweet Spiral Rations, which look and taste like what we have come to know and love as a churro.

[For more photos and descriptions of the upcoming food options, check out both WDWT and SYFY.]

***
Needless to say, we’re pretty thrilled we renewed our annual passes for this year!

These new attractions are set to open at Disneyland’s California Adventure in Anaheim on July 18th, 2020.