While you are soon to be leaving this world I wanted to be one, of I’m sure many, who will always cherish the memories that you gave us as children. Growing up before the days of the internet and major companies like Amazon, Walmart and Target. Toys R Us was a place where a kid never worry about growing up. It was our own personal Neverland. I still to this day remember making a mad dash down the bike aisle to get to the Ninja Turtles, He-man, and Ghostbusters sections. I needed to see every new toy. It was a joy, that even as an adult, I still get upon entering you from time to time. I would beg and plead for every toy possible. I wanted it all. While I often did not get my way, the pleasure of being a part of your hay day was an honor.

I remember every birthday hoping for Geoffrey bucks in a birthday card, while it was totally monopoly money when used in a Toys R Us that shit was gold to us.

As my toy collection grew so did my love for this store. I remember getting older and gaming became more prevalent. It felt as I grew so did you. I remember when games had so few consoles and titles they could all be displayed behind glass as if it was a collectors dream collection. Not to mention you never got a physical copy of the game you simply got a piece of paper. This paper slip was the same for all big purchases including bikes, consoles, Power Wheels and some electronic toys like the Talkboy (made famous by Macaulay Culkin in Home Alone 2). 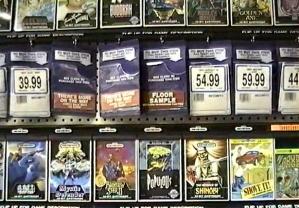 I remember the joy it would bring me standing with my folks waiting for them to deliver this item from the back. Like I was the winner of some special prize and they had it on hold just for me. I remember the defeat of after saving every dollar you could to buy a item like this only to find that all the slips were gone implying the item was sold out.

To this day I will still sing “I don’t want to grow up I’m a Toys R Us Kid”. I kills me that I will never have that moment with my own child one day as I am not a parent yet. I actually looked forward to running down an aisle with the little one and them begging me for a toy and (if I am lucky that day) having enough to not only buy the toy but all the accessories so we can run home and both play.

I also apologize for the rest of the world in how they evolved. Kids these days I are more mini adults. I heard the other day a 6 year old having a conversation with her father about the film visual and the over arching plot and where she felt the director completely missed the point. And I simply thought to myself, while I guess that is cool what happened to just being happy and playing like real kids. Are parents that obsessed about being friends with their kids that they are making them jump to adulthood soooo quickly? I never see kids with a toy in there hands its always a cell phone. I remember having on me at all times some type of car, or action figure, or anything.  It made me long for what seemed like a simpler time. Parents of the world remember to make sure you little ones enjoy these moments. Just because the world is changing so quickly doesn’t mean you have to let them miss out on some real fun. Toys help build creativity and imagination. And I know I am not the only one who after seeing the end of Toy Story 3 ran home to play with your toys because you could relate.

I will never forget the joy of finding an original April O’Neil action figure (1 per case), I will never forget “test riding” bikes up and down the aisle, I will never forget collecting Beetlejuice toys, I will always remember begging for that race track and never getting it, I will still remember the burns that my creepy crawler set left me as that metal pan came out 1000 degrees to melt my stupid dumb kid hands, I will remember buying my first rocket from you and launching it so high into the sky to never see ever again as it crested a forest in the distance… damn you wind, I’ll never forget playing all the new video games I was not allowed to own like Mortal Kombat, I remember Zoids and how they were basically moving Lego robots, I remember Mighty Max, I remember my mom running through a herd of people to try and snag at least one of the power ranger figures while my best friends mom ninja grabbed two Green Ranger Dagger’s for he and I,  and I will always cherish the memories.

Toys R Us Thank you for everything. You will always be my favorite store, even though i totally used to cheat on you with Kay Bee toys. I hate to think that 100% toy stores are officially dead. I will miss you.

~ A loyal customer to the bitter end.

One thought on “Good Bye Love Letter to Toys R Us”