Waaaaay back at Comic Con 2015, I was one of the few reporters allowed into the Starz pressroom for their new historical-fantasy-drama series Outlander, based on the world wide best selling novels by Diana Gabaldon.  The series recently was likened to Battlestar Galactica, which just happens to be one of my top five shows of all time.

Here is the EW article pointing these things out, and you’ll see what I mean.  But Ron D. Moore tackling an epic series again?  Not to say that Helix isn’t awesome, but I hear rumblings that he isn’t more than a producer on it.  As a fan of the book series, I KNEW we’d be in good hands with Mr. Cylon himself.  And, as of this morning, Outlander has been officially picked up for a second season before the second episode of season one even plays.  That’s pretty awesome.

We weren’t allowed to take photos or video in this pressroom, which was odd, and I was sad I couldn’t take height comparison photos standing next to  Sam Heughan (Jamie Fraser), Caitriona Balfe (Claire Fraser), Tobias Menzies (Frank Randall/Black Jack Randall), Graham McTavish (Dougal MacKenzie), Lotte Verbeek (Gellis Duncan), and of course Ron.  I should also inform you readers that for these roundtable interviews, I was dressed as Rocket Raccoon from Guardians Of The Galaxy.  Not kidding; ears, tail, black nose and whiskers, making everyone I spoke to smile and regarded me with amused ease.  (This, aside from being a fan of the things I cosplay, is why I continue to wear my characters to interviews.) 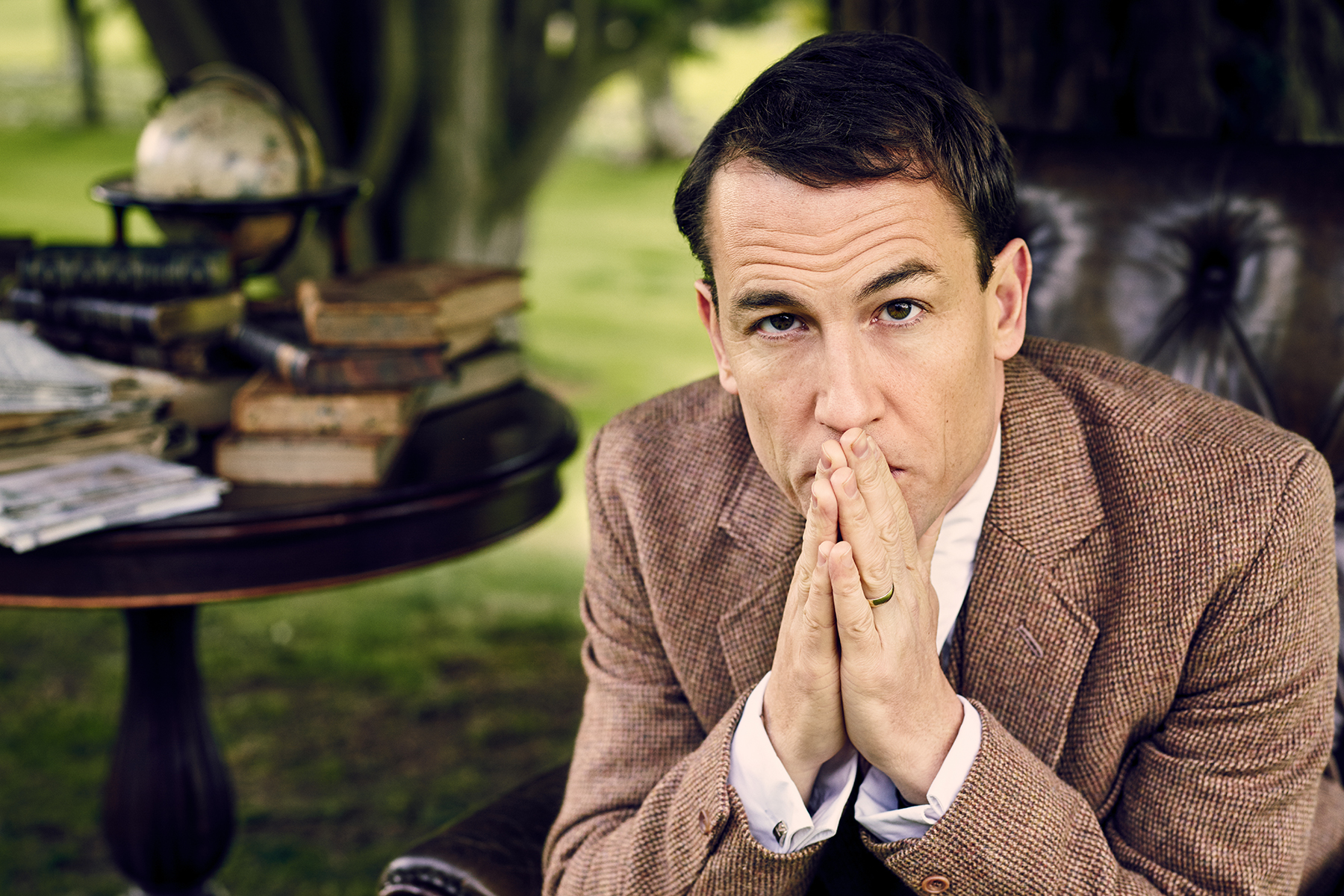 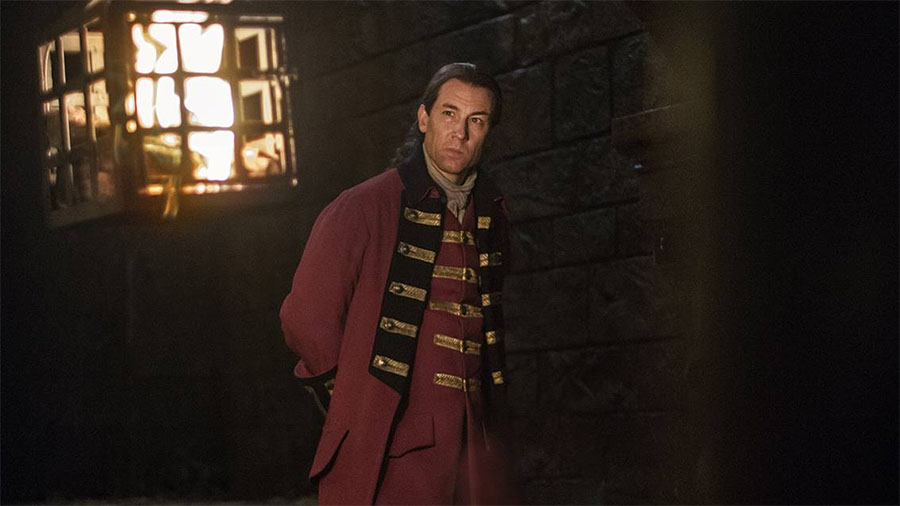 Tobias:  I’ve enjoyed it, I’ve not been here before, it’s been a whirlwind 24 hours.  We had the premiere last night, and I got to meet many of the fantastic fans.  It’s wonderful to have it out there, finally, after plugging away on it all these months in Scotland.  It’s quite nice to share it now.  There are a lot of people with a lot of affection and care about these stories, there is a tremendous amount of responsibility on us for it.

Q:  SO when you first started creating the character of Frank, what was the goal in conveying him to the audience?

Tobias:  I think within the structure of the piece, I think it’s quite important that the relationship between Frank and Claire has real depth, and that the audience cares.  Because going forward, she has to make the choice after going back in time and losing him, making that choice to stay in that time, it means something to everyone.  And there’s actually more of Frank in the series than there is in the book, Ron has built that up.

Q:  Honestly in the book, I never really thought much about Frank, so, I was impressed with how you played it, because I’m sure it can get confusing between Frank and Black Jack, but you did it perfectly, and I totally bought into their marriage.

Tobias:  Oh, thank you.  And I agree that Frank is rather thinly drawn in the book, I felt it was important from the beginning to give him some weight and some structure.  That there was indeed a proper relationship, that there was love and sexuality, so that when she (Claire) had the choice between two very different men, they were two complete relationships.  I’m so glad that it’s something that’s reading to the audience.

Q:  The jumping on the bed scene was just….perfect.

Tobias:  Yeah, it just sort of gives it humor and light.  And it’s such a different relationship than what she finds and has with Jamie, but it’s no less important to her.

Tobias:  The usual I guess, some reading, some research into the different periods.  The similarities and differences.  When I first met Ron, he found it interesting that both men were shapped by their experiences in war, albeit different outcomes.  Frank, with the love of a good woman has survived and is in ok shape, marked by it but not lost by it.  Whereas Jack has gone to a very dark place, through his experiences with the British army in Scotland in that time, which was very brutal. And that helped a great deal to sort of delineate who they were.  And the costumes helped alot, the sets helped a lot, the writing, all the things the show gives you helps with the interesting challenge of trying to render two different people.  And you sort of have to keep your fingers crossed as well, that people buy it.

Q:  Did you get to talk to any of the fans after the showing of the pilot?

Tobias:  Oh after last nights?  No, not afterwards.  We did have that Comic Con Q & A during the day, and that was very relealing.  A lot of people in that room who know the stories much better than I do, and that was interesting.  And some of them were at the screening last night, there was lots of excitement, which is encouraging.  But I didn’t stay around after the screening, I was mainly jet lagged and looking for a drink.  (everyone laughs)  I couldn’t care less about the fans right then, KIDDING!

Tobias:  Because I haven’t seen or read any raccoons yet.

Tobias:  A raccoon that turns up in the story?

Tobias:  Well see, you can say that, because I haven’t read any of the second or third yet at all.

Me: That’s why, because it’s later on.  But the whisky-

Tobias:  So in a couple of years time, I’m going to be reading it, and going ‘she LIED TO ME’, aren’t I?  And yell out ‘THERE ARE NO RACCOONS HERE”!

Me:  No, no, it’s gonna happen, and you’re gonna laugh and go “GOD THAT RACCOON WAS RIGHT!”  (everyone laughs)

Tobias:  Well what time period does the raccoon show up in?

THIS IS A SPOILER WARNING FOR THE BOOKS PAST NOVEL 2.  IF YOU DON’T WANT TO KNOW, DON’T CONTINUE READING.

Me:  It’s when they are in America.

Tobias:  Oh of course.  Wait, they go to America?

Me: …you really HAVEN’T read any more of these, have you?

Tobias:  I’ve read the first one, and maybe 200 pages of the second one.  The first season is the first book, the second the second and so on.  But the whisky-

Me:  Yes, the whisky.  It’s such an interesting and at times important part of the world Diana writes about.  Were you a whisky drinker before the series?  Are you now?

Tobias:  Whisky?  But in which period, though?

Me:  In all of them, but specifically in Jack’s.  He detests it in the beginning we see in the book.

Tobias:  Oh really, yeah, I’d forgotten that bit.  I do like some whiskey, actually.  A good single malt.  And we’re obviously shooting in Scotland, the home of good whisky, so in fact as I walked in, Graham was trying to get me to agree to go to a whisky tasting tomorrow morning at 11am!

Tobias:  I mean I like whisky, but maybe not at 11 o’clock in the morning.  YEAH, pour it over my cereal, who needs milk?

Q:  In the last two years, you’ve been involved with 2 massive fan favorite tv series based on book series, can you talk a little bit about the differences?

Tobias:  Oh, I guess there haven’t been differences, really.  With Game Of Thrones, I was coming in the 3rd season, it was already established.  I was fitting into something already alive and kcikcing, I enjoyed that a lot.  Both David Benioff and Dan Wiess are very dedicated, very clever, great storytellers.  The way they are putting those books on the screen is very sophisticated, very bold, those worlds are so peopled and huge they’ve had to pick their fights, and done a good job of their adaptaion.  And this one, I’ve been in it from the beginning, from the ground up really, and you have a little more imput.  The creators need you to get invovled, and you’re party to costume desicions, and I’m nosey like that.  I think the two books are very different, Thrones is very much a fantasy world, and Diana’s world is a real place, with more an element of sci fi, even with the time travel, but it’s to a real place, a real time.  And there are no dragons.

Tobias:  Yet, as long as the raccoon is coming as well, why not?    Which raccoon are you being, anyway, it’s not from our show.

Me:  No, I’m Rocket from Guardians Of The Galaxy.

Tobias:  ….should I know that one?

Me:  It’s the next Marvel big movie, it’s not out yet.  But on to the fantasy you mentioned, there is a scene in the books, that I know they’re not doing in the show, that is one of the few times we get a bit of the fantastical element of things.  And it’s the Loch Ness Monster scene-

Tobias:  You think it’s not in the show?

Tobias:  Huh.  I’m pretty sure I read a script where that scene is in it.

(At this point everyone at the table starts laughing gleefully, because before our session started, we all chatted about the one ‘big question’ we wanted to ask, and mine was of course The Water Horse, because I’m a dork.  And they were enjoying the look of awe on my face.)

Tobias:  I mean far beit for me to contradict the mighty mighty man, but maybe it didn’t make the cut or something.  Maybe it got niped out or something, but yeah, certainly there was a script with that in it, where she (Claire) sees it.

Me:  It was one of the things I really wanted to see in the show, because it’s that bridge between the mythical and the real.

Tobias:  Oh yeah, definitely, the Loch Ness monster is one of those magical things, isn’t it.

Handler:  I’m sorry everyone, I have to steal him away now.

Tobias:  Oh why?  I’m having such a nice time with Raccoon here, and I have wine, I could be here for ages. I’m sorry I didn’t bring more wine for the group, I didn’t know if you guys would be cool with wine in the morning like this.  Oh here, you want some?  (offers me some)  Oh farewell, Raccoon.

Outlander airs on Saturdays on the Starz network, episode two on 8-16-14.