When we mention Aussie actor Travis Fimmel, it’s usually related to his time on HISTORY’s “Vikings,” or to retell one of the numerous stories of his playful hijinks at panels, pressrooms, or on-set pranks. That’s not to say we don’t talk about his impressive acting prowess, because he really is one of the most fascinating actors to watch in any genre.

His most recent project “Danger Close” is both a departure from his usual roles, and completely familiar at the same time. 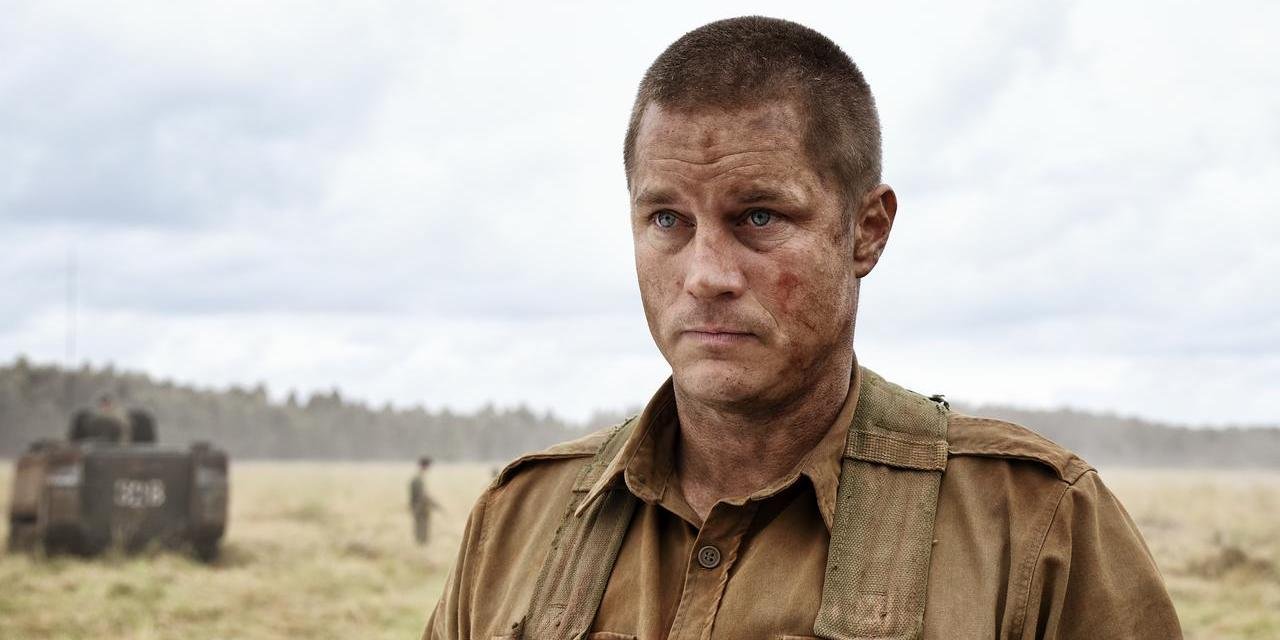 Late afternoon August 18, 1966 South Vietnam. for three and a half hours- in the pouring rain, amid the mud and shattered trees of a rubber plantation called Long Tan- Major Harry Smith (Fimmel) and his dispersed company of 108 young and mostly inexperienced Australian and New Zealand soldiers are fighting for their lives, holding off an overwhelming enemy force of 2,500 battle-hardened Viet Cong and North Vietnamese soldiers. With their ammunition running out, their casualties mounting and the enemy massing for a final assault, each man begins to search for the strength to triumph over an uncertain future with honor, decency and courage.

Check out the trailer before diving into the interview:

AC: How familiar were you with this particular battle, this chapter of the Viet Nam War, before joining the film?

TF: I really did not know much about it before joining, it made me feel a bit dumb. But it also made it more important to me, ‘god, I should be way more familiar with this,’ big part of Australian history. I felt like this was a great film to be showing in schools. The younger generation- mine too- should know more about this.

AC: Did you do any additional research about either this particular incursion or any other portions of the war after this, did it spark any additional interest in this slice of history for you?

TF: Well, no. I did most of my research before filming, and I was thankfully surrounded by a lot of very knowledgeable people on this. A lot of the guys who were actually there. So we had great sources for our information, for this amazing story. I got to meet some incredible people.

AC: You are so often a leader of men in the roles you play-

TF: Yeah well I want to be a leader of women as well!

AC: I mean you’ve done that too across HOW many seasons of “Vikings?” You always seem to be that guy, the leader among warriors. Have you found any real difference in whether those warriors are holding swords or machine guns?

TF: Not at all. As an actor, you try to make everything very meaningful to you. When you have a character who’s extremely important to you…[he pauses]…right or wrong, you try to do the right thing by them. To take care of them, to keep them safe after. A lot of my characters take the tough love approach, and I always find that more interesting. 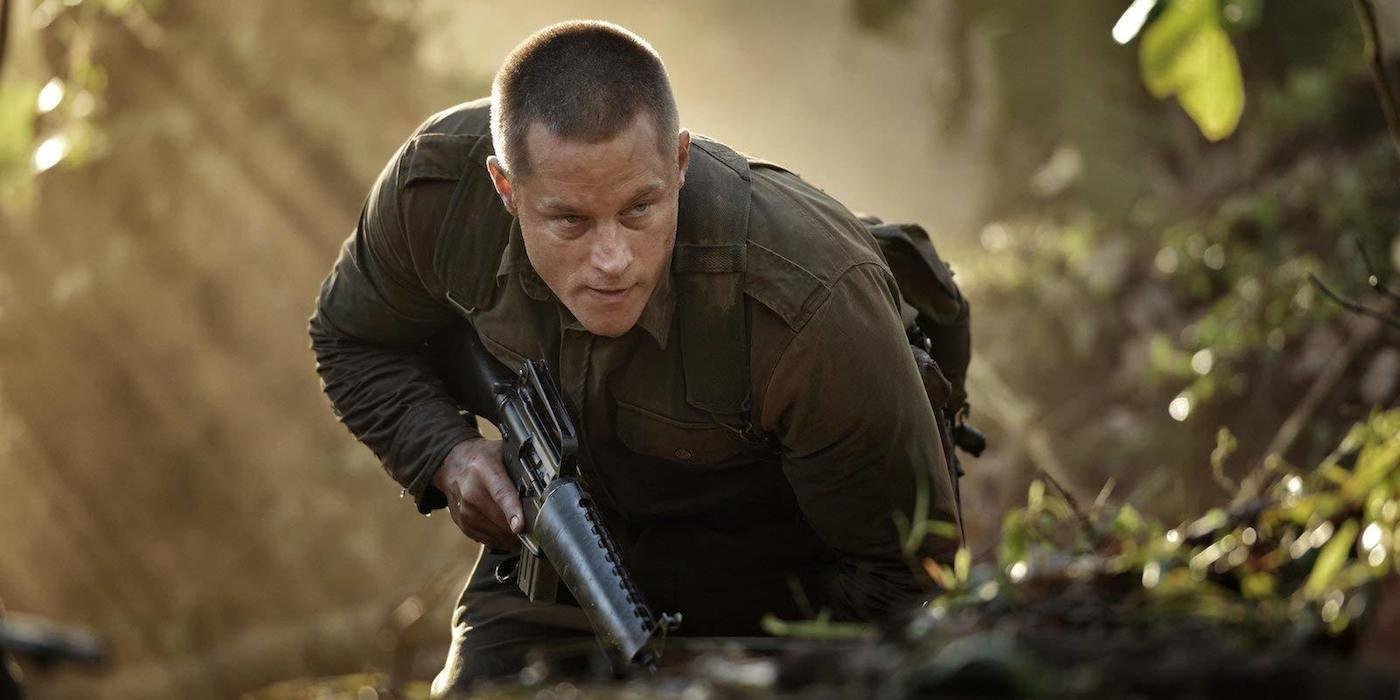 AC: This film follows a very small piece of the Viet Nam War, and we get a small glimpse into what it was like for the men in the jungle- in the mud, the rain, the extreme heat- what was that like for you guys during filming?

TF: Well obviously, it wasn’t easy. With all that equipment…in the rain. Most of the battle was in the rain, it makes it very hard on the crew, and the logistics and stuff. It helps as an actor, it gets you in the mood. It’s funny, we shot this in Queensland, and they weren’t rubber trees, they were trees that LOOKED like rubber trees, and the entire film was done in a 20 acre paddy. It’s amazing what they can do. We didn’t use real bullets, and you can probably see my mouth during the film going “pew pew pew.” It’s a natural thing, when you’re a little kid, to make those sounds.

This project was just so….so different than an American film.

AC: Maybe it sounds silly, but was there a part of “Danger Close” that stands out to you during filming as particularly difficult? This is perhaps one of the more….naturally human roles you’ve had recently- no CGI monsters, no supernatural elements…

TF: It was really great to be doing this film with so many Australian actors. Most of us are just over here [in the USA] working, and we all want to be working at home [Australia] more. The population doesn’t really hand itself to making any money back there. It’s hard to make a film and have it make money back there, because it’s only 22 million people who will watch. But we really do all love working there, and would love to do more. It made me really, really miss it. Don’t get me wrong, I am incredibly grateful to come to America and work, so many opportunities here, some of Australia’s most talented cinematographers and directors are all over here [USA], but all want to be working at home.

AC: You’re always fascinating to watch as an actor, in any role you play. I love trying to pick out which things you’ve added to the character, and which were scripted.

TF: Thats….a funny way of looking at it. [laughs] If it’s definitely the actor, or if it’s the role that you know….

AC: Like in “Danger Close,” there is a scene of Major Harry Smith [Fimmel’s character] sitting in the command tent trying to eat his pho with chopsticks. You just sort of fail utterly at it, and give up, eating the noodles with your fingers instead.

TF: Well some filmmakers don’t let you do those, little choices. Those doings…I think every actors call them doings. The great directors let you do that stuff.

AC: In “Vikings,” there are so many examples of those bits of business, like Ragnar rolling up the priest’s tabard under his chin during a particular chat. Was that one of your moments or was that a Michael Hirst scripted bit?

TF: Oh those are pretty much always me, as an actor’s job. But working with Michael was, is, always amazing. I miss working with him. He was always so collaborative, open to things.

AC: Whats the next project you’ve got coming in?

TF: Coming up…I just did a Ridley Scott tv thing [“Raised by Wolves” for HBO Max], we shot 10 episodes and it’ll be coming out next there. Then there was the Quibli thing with Sam Raimi [horror anthology “50 States of Fright“] who is one of my favoritist people in the world after working with him, such a great guy. It was such a different experience, it was a great thing! There’s “Die in a Gunfight” in Toronto, and then I’m gonna go kill crickets [we’re assuming this is in relation to John McTiernan‘s upcoming “Tau Ceti Four”].

[Also, he doesn’t mention it, but Travis will be playing FRICKIN’ WYATT EARP in an upcoming series about the famous US Marshall, and we can’t wait!]

Thank you so much to Travis Fimmel, who I’ve personally been interviewing for almost 7 years now. Never a dull moment, and always a delightful chat. Can’t wait to do it again.

“Danger Close” released in cinemas on November 8th, 2019 and is currently available on Digital and on Demand.