If you’re unfamiliar with what a roguelike is, I’ll refresh your memory: It is pain incarnate.

I mean that in the most positive way. Roguelikes are often heavily complicated endeavors. Strategic dungeon crawls rife with formula and danger, they are one of the more hardcore considerations of gamers these days.

Enter Sword of the Stars: The Pit. A bastard relative of the 4X series, Sword of the Stars takes the commonly fantasy-based roguelike genre into the sci-fi space (get it?) and it’s gold. Terrfyingly difficult bullshit-filled gold.

Essentially the inhabitants of a colony have been infected by a terrible plague. You play as one of the few remaining soldiers of said colony, delving deep into an alien facility that supposedly contains the cure to said plague. The story is fairly bare bones. I’d love to tell you how it ends, but all my expeditions have ended in failure. In fact, let me recount to you my most recent-and closest to successful- attempt.

After having most of my hard-salvaged equipment dissolved away by acid, and tearing my way bit-by-bit through two floors filled with terrifying and heavily infectious enemies with my bare hands, I reached the bottom floor. Once there, I encountered a number of enemies never before encountered. After salvaging the necessary materials to render myself a set of awesome adamantium claws and tearing up a few more rooms. I found a door I could not unlock that led to a room near the center of the floor. I tore the door from its hinges in a hulking rage, only to find six disease-ridden alien bears inside. The first grabbed me quickly, and after a brief struggle lay dead at my feet, but not without first infecting me with a rather severe disease. You see, if you contract a disease which reaches level 5, you die immediately. I delve into my pockets and produce some aggressive antibiotics (an inventory mainstay since falling prey to disease several playthroughs earlier) and cured my disease. Immediately afterward I was grabbed by another bear. This one, too, infected me with stage 4 disease. I killed it, and was grabbed by another, and another, until all bears lay dead at my feet. Then, as I produced and injected another dosage of antibiotics, my disease ticked to stage 5, killing me.

Frustrating as it was, I was nothing but satisfied. The game plays from a standard top-down perspective. The visuals are reticent of the 16-bit era times. The player chooses from three classes: the combat based Marine, the technical Engineer, and the skilled Scout. The game randomly generates a dungeon of 30 (I believe) floors of ascending difficulty filled with lockers and storage pods to raid for supplies, lab stations to render new items from ingredients, cookers to keep oneself fed, and most importantly many, many enemies intent on your utter demise.

There are plenty of weapons and tools with which to aid one in his or her travels. Containers and enemies drop plenty of items which can be whittled together into more useful forms, the recipes for which can be found by deciphering messages from various consoles found in the dungeon. 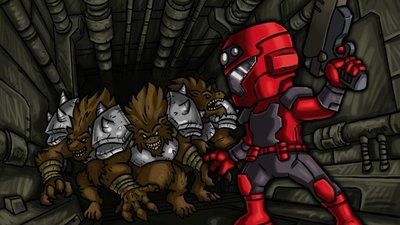 Each of these actions are governed by one of a batch of skills that govern anything from medical talent to mechanical skill. Experience is gained through nearly any action in the game. Killing an enemy. Picking a door lock. Making a sandwich. Drawing a vial of exotic proteins from a bio pod.

Replayability is high, especially considering the occasionally harsh difficulty spikes. Many games follow an unusual parabolic curve, drifting from starting with only basic equipment to having too much to carry, and ending with little more than bare hands and buttloads of ingredients with no lab stations to make use of. The equipment salvaged can run the gamut from extraordinarily useful, to practically worthless, and numerous playthroughs are required to even vaguely consider oneself well versed in the recipes available.

But as roguelikes go, the game is fairly lightweight, offering complexity and a level of depth that is digestible to the unfamiliar gamer  without sacrificing too many of the qualities that make up a roguelike.

The UI could do with an overhaul, though, with an inventory that is borderline-nightmarish to manage at times, and those playing on a laptop with no mouse may find themselves swinging weapons at nothing in particular or having difficulty navigating the character menu. Couple this with a healthy dose of spelling errors, and you can see the smaller size of the team showing.

All in all, though, the game is a solid exodus from 4X to roguelike, and didn’t try too hard to be something it knew it couldn’t be. Cheeky while unforgiving, it’s a game that expertly marries strategy and fear with snark to create a good package at a great price. You can pick it up on Steam for $9.99. I’d recommend it.